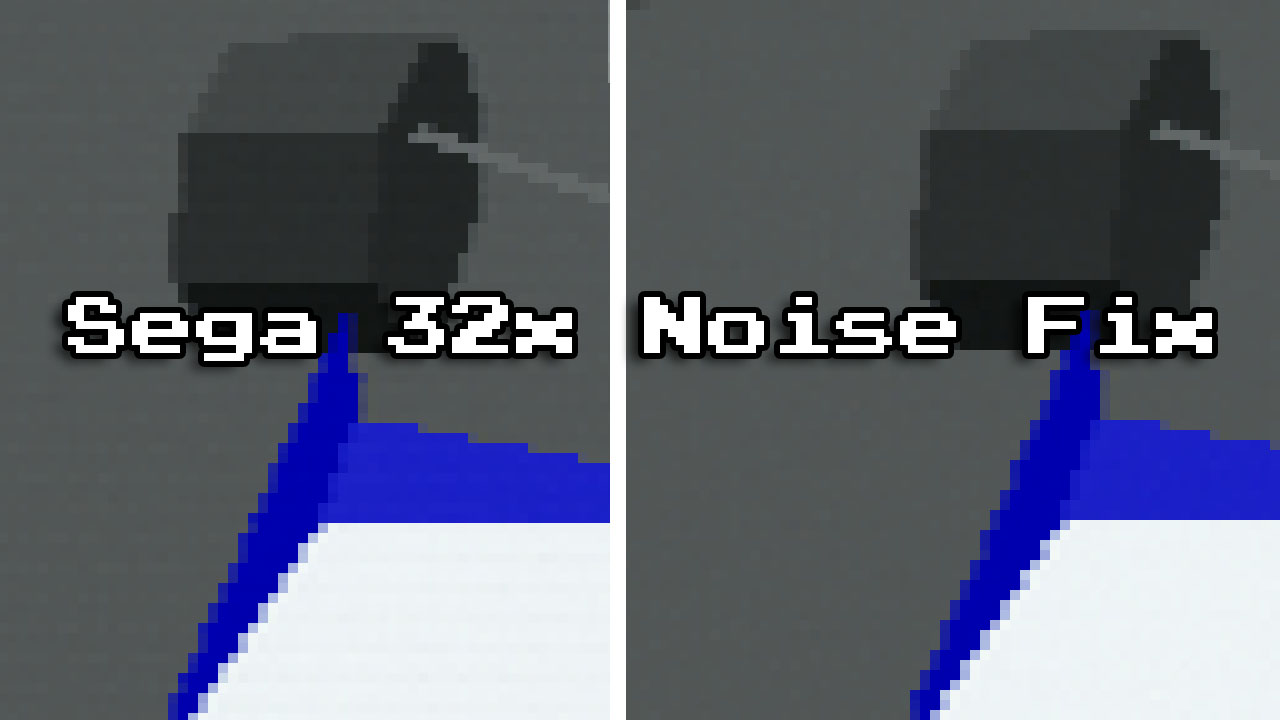 A few months ago, Kevtris proposed that part of the video noise introduced by the 32x’s video layer was caused by it’s switching power supply.  He suggested replacing two capacitors with different values to see if the noise went away.

I wanted to put this to the test on a 32x I recently received and I did see a difference in noise.  Before I get into that though, it’s important to understand how the 32x works and how noise may be introduced.

First, the 32x ads a layer of video on top of what the Genesis already generates, which is why you need to plug the Genesis’ video output into the 32x, then plug your video cable into it.  For some games, the Genesis only draws small things, such as life bars or certain effects and the 32x draws most of the image.  Other times, it’s more of a combination of the two.  Regardless, the interference you see is twofold:  Whatever the Genesis ads and whatever the 32x ads.  In original consoles that have had the Sega Triple Bypass installed, or when using the Mega Sg, the Genesis layer is clean, meaning any interference left is coming from the 32x.  This is why you can leave your 32x plugged into your Mega Sg and only see interference on 32x games; Genesis games still look fine.

Tracking down the source of the 32x’s interference has been tricky and Kevin’s fix seems to have cleaned up some horizontal noise in the one I tested.  This unit was graciously donated by a Patreon supporter who previously replaced the capacitors with a kit that Console5 sells, but they left the two capacitors that Kevin identified in there;  This way I was able to take video and still pictures showing before and after the two caps were replaced, on a unit that’s already in great condition.

Here’s some before and after pics and a video, but please keep in mind that I wasn’t able to dial in a perfect phase setting (since there’s no checkerboard pattern available for the 32x) and I didn’t use any tricks like oversampling:  This is a direct capture in it’s native resolution, scaled to 4K as described in the video capture section.  Also, I didn’t upload the video to YouTube (or others), as compression from video streaming sites ruins comparisons like these.  I suggest either downloading the video file and watching on a bigger monitor (not your phone ;p) or just click on the picture for a full-sized view and zoom in:

Direct download of video (exported uncompressed, then compressed only once with Handbrake):  http://retrorgb.com/assets/videos/Sega32xKevtrisNoiseFixComparison.mp4

In my opinion, this fix is worth doing.  There still might be other ways to tweak the 32x’s output, but overall it seems to be a reliable way to reduce noise with no negative side-effects (at least none we’ve found so far).  Just keep in mind that the big cap is easy to replace, but the SMD cap is in a tricky spot.