The Game Gear was released by Sega in a few different configurations and later re-released by Majesco.  The different Sega revisions have no difference whatsoever in output quality, however the Majesco version is a slight improvement.  If you’d like information on the different models of the Sega versions (including colors and PCB revisions), I suggest checking out the pages linked below.  This page concentrates on the main differences of the Sega vs. Majesco model, as well as a version of the Sega Game Gear that boots faster.

Sega vs Majesco
With permission from Sega, the company Majesco re-issued the Game Gear in the year 2000.  This version of the Game Gear isn’t compatible with the TV Tuner or Master Gear Converter (although it’s compatible with another SMS-to-GG converter called the Nuby Converter).  This version has a slightly improved screen and is less prone to failures (most likely as a result of using better capacitors).  It’s been said on forums that this version feels “cheap”, but I’ve never found that to be the case; Every version I’ve played feels just as solid as the original Game Gear.  If you plan on playing games on the original, unmodified handheld, this is the version I recommend you use.  Both screens are extremely poor quality compared to modern LCD’s however the screens used in the Majesco versions are definitely a bit better, with more accurate color representation.

It’s very easy to tell which Game Gear’s are the Majesco model, as the logo above “Game Gear” is all white, instead of red, greed and blue.  Other notable changes are the stickers in back and the darker color of the plastic.  All you’ll need to look for is the logo color difference, but I included full pictures for reference (the pictures are a bit dark to help point out the color difference).  You can click on each for full-sized versions.  Sega on the left / Majesco on the right:

Curved screen cover versus flat screen cover:
Some Game Gear systems came with a front screen cover that was flat instead of rounded.  This design does not effect the way the screens look and is purely an aesthetic difference.  One thing I’ve noticed is that Game Gear systems with the flat screen cover don’t have TMSS, which is the annoying “produced by” screen that appears for a few seconds before launching the game.  As soon as you power on these models, it immediately loads the game.  This screen is only displayed for a few seconds, but I find it annoying and specifically chose a “flat screen” model for my RGB-modded Game Gear, just so I wouldn’t have to deal with it: 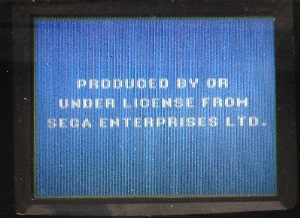 Below you’ll find pictures showing the difference between the two screen covers.  Once again, they’re purely aesthetic, but I did want to show the difference.  Click on each image for full-sized versions: 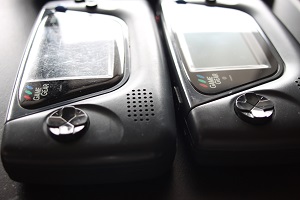 Please head back to the main Game Gear page for more information.