The Best Version Of The Sega Genesis

The answer of “what’s the best Genesis?” is very complicated.  Due to the audio output, there’s one version I definitely feel is the best to buy:  The original Genesis 1 that has “High Definition Graphics” written on top and has the ext port on back (for the record, the ext port doesn’t effect quality, it’s just an easy way to determine which revision the Genesis is).

Also, try to find the version with the longer FCC ID (found on the bottom of the unit, near the serial number).  Those versions don’t have TMSS (the annoying startup screen that says “PRODUCED BY OR UNDER LICENSE FROM SEGA ENTERPRISES LTD.”), they just boot straight to the game.  I’ve seen some systems with the “correct” FCC ID that still had TMSS;  I’m not sure if someone swapped cases, or if there were a few that FCC ID that had it, so you’ll have to power it on to be sure: 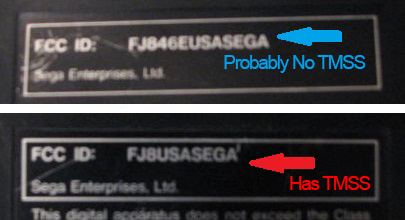 The audio output on Genesis systems is much better on some systems than others.  Some people have traced exactly which Genesis systems have better audio and some people have even figured out how to “fix” the audio on most of those systems.  That being said, I’ve found it confusing to find which systems are the “good” ones to buy and sometimes the only way to really find out is buy it and try it.  If you’d like detailed information on all versions of the Genesis, I highly recommend this page:

The reason I recommend the Genesis 1 described above is the audio is always perfect (unless, of course, the system is broken) and it’s really easy to find the right version just by looking at it.  As of 2014, there’s another option for fans of other Genesis models: You can install a circuit in any model Genesis that will have audio that’s just as good as the original.  Here’s the site with more information:

I made an audio comparison of a “good Genesis vs. bad Genesis” for you to hear yourselves.  Please make sure to wear good headphones when listening, so you can get the full effect of the differences:

Genesis 3:
All versions of the Genesis output RGB natively, including the Genesis 3’s…although many people have issues with their RGB cables fitting properly into the Genesis 3.  Also the Genesis 3 only can never be compatible with the Sega CD and requires a mod to allow for master system playback and another mod to be 32x compatible.  On top of all that, all Genesis 3 systems only output mono audio, just through the left speaker!  You can easily mod it to output mono through both speakers, or install the Mega Amp mentioned above for true stereo output.  If interested, here’s more information on mods for the Genesis 3:

Modding the Genesis 3 for S-Video

Genesis 3 – Alternative Stereo Audio Mod (scroll down for it)

The Genesis 1 only outputs stereo through it’s headphone port. As a result you need to make sure you get the correct RGB cable. All the info you need is in the Genesis RGB Cable section.

You can perform an audio mod to get better quality audio from your Genesis 1. I have an entire page dedicated to this, with detailed instructions.

There have been reports of those old Genesis systems wearing out: Their capacitors can dry out, which causes poor video.  This makes buying one easy…simply power it on and make sure it looks okay!  If you already own one that’s broken, you can replace the capacitors by reading the information off the original caps and ordering the same ones online.  That’s not an easy task though, so make sure you’re good at soldering and know where to get good quality replacement caps!

If you’re done, please head back to the main Genesis page.  If you’d like info on mods for other systems, head to the Getting RGB From Each System page or check out the main page for more retro-awesomeness.