The AVS is a lag-free, FPGA-based NES/Famicom clone console from retrousb.com, that outputs a 720p HDMI signal.  Please read on for all the info and features. 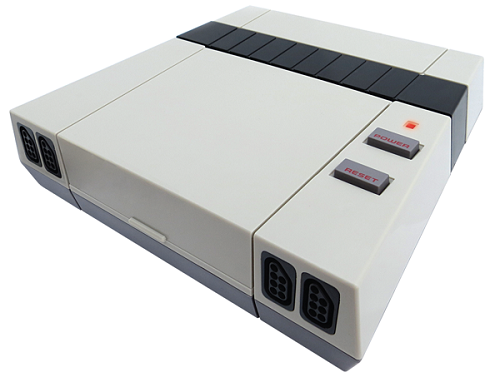 The AVS was created by Brian, the same person who runs retrousb.com and also the same person who created the Powerpak; The first fully-functional NES ROM cart. It’s technically a “clone console” as there are no original NES/Famicom chips inside, however it is not software emulation: The AVS is an FPGA-based hardware console that was built from scratch. Here are its basic features:

– Under $200 (currently $185)
– HDMI, 720p output only (no RGB or analog output)
– Lag free
– NES Cartridges, Famicom Cartridges and ROM Carts are all compatible.  It also works with the Famicom Disk System.
– 4 controller inputs
– Famicom expansion port in the back
– Powered by a USB connector that can also be used for software updates
– Cheat codes supported
– “Scoreboard” functionality
– No light gun support, even on CRT monitors (it’s a refresh rate thing)

The AVS is made from molded plastic and the design is excellent. It honestly feels like something made by a large company, not a very small team of people. I’ll describe each angle and it’s features, starting with the front, which simply has four controller ports, the cartridge door, power LED and Power / Reset buttons that are exactly like the original NES’: 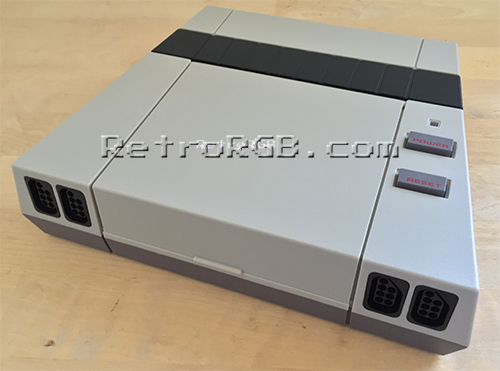 From left to right, the rear of the console has an HDMI output (720p only), a USB port used for both charging and connecting to a PC and a Famicom expansion port for use with all the peripherals.

The bottom really shows the detail put into the plastic tooling, as it has contours that are very reminiscent of the original NES’: 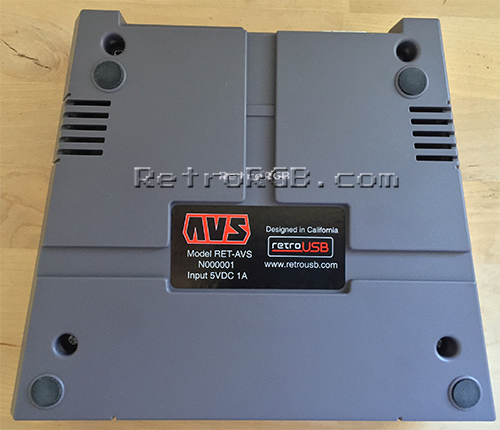 Inserting a NES cartridge is a bit tricky, as you have to line it up and feel around until it’s in the socket.  Once it’s in, the door can be completely closed, like with the original front-loading NES:

Famicom cartridges fit perfectly and allow the door to close a bit, but not all the way: 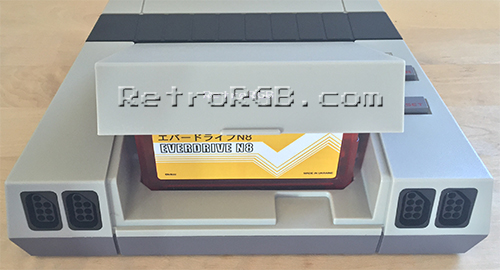 Even the Famicom Disk System’s RAM cartridge fits, although it’s a bit awkward with the cable protruding from the back of it: 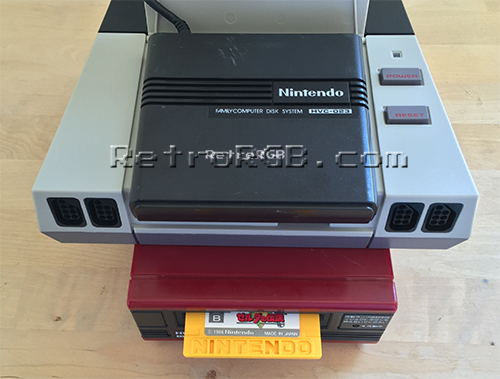 The AVS has a somewhat limited menu compared to devices like the Hi-Def NES and UltraHDMI, however they cover almost everything you’d need.  The main menu is below, plus I’ll go through all the sub-menu’s: 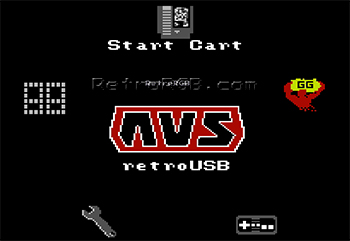 The scoreboard functionality requires the AVS to be connected to a PC.  You’ll need to sign up at nintendoage.com and download the utility.

Cheat Codes can be loaded through this menu and when I tested with original cartridges, it actually recognized which game was inserted and offered common cheat codes. What a cool feature!:

Menu Buttons – Set the combination to return to the boot screen.

Cheats – Set the combo to toggle cheats on or off.

Turbo – Toggles a turbo feature for each button.

Auto Play – Go directly to the game when powering on.

Video Options
The video options are as follows:

Scanlines – All the way left is off, then scrolling the bar right adjusts intensity.

Left Side Show – This cuts off some of the overscan “garbage” found in some games such as SMB3.

Extra Sprites – According to the manual:  “The NES has a limit of 8 sprites per scanline.  This option increases that limit to 15, making some games flicker less.  Other games rely on the 8 sprites limit and will need this option off.“

Exp Volume – This raises or lowers the volume of games with Famicom Expansion Audio. This shouldn’t be needed for original games, but could come in handy when using ROM carts.

Pixel Aspect – In short, this adjusts the width of the image. I prefer it in the middle (4 clicks from either side), but you can adjust this to your liking. Here’s some examples of both extremes:

Vert Border – This cuts a bit off the top and bottom of the screen. Once again, this is to compensate for any garbage on the screen that would normally have been hidden by overscan on a CRT:

Here’s one last pic of each extreme of Pixel Aspect and Vertical Border (click for full-sized):

The original Famicom had more extended audio capabilities then the NES.  It’s proven to be extremely hard to emulate some of these audio channels and even later revisions of the console such as the AV Famicom sound different then the original.  Adding more confusion, ROM Carts use their own emulation to mimic the extra audio channels and sometimes it’s not very accurate.  I decided to record audio from original games only, from two different sources that are known for their very different expansion audio:  The Legend Of Zelda’s Famicom Disk System game and Akumajou Densetsu (Castlevania 3).  I also wanted to use a variety of sources:

– The AVS which uses the audio from the original cart / disk.

– Original Famicom modded with a NESRGB kit, including the audio board.  This should give the most accurate representation of what the audio should sound like.

– An AV Famicom modded with the Hi-Def NES HDMI kit, which produces its own audio.

I recorded the opening of both games from each system and included them in the above video at 7:45.  I wanted to extract the audio, but was mindful of the fact that there was already compression applied when the HDMI signal was recorded.  As a result, I felt that simply saving as a .wav would produce more accurate results then re-encoding to an mp3.  I liked the original Famicom audio best, but the AVS was a very close second.  Listen for yourself and see what you think:  http://www.retrorgb.com/files/FamicomExpansionAudioComparison_AVS-Famicom-Hi-DefNES.zip 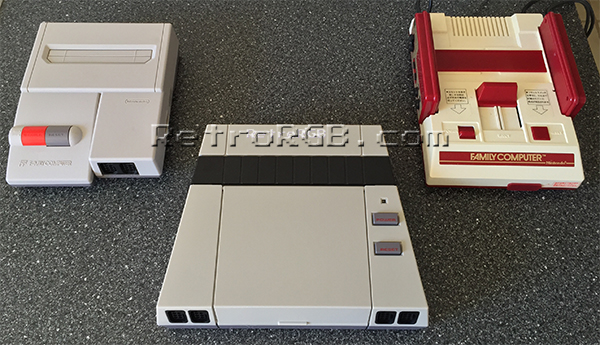 The insides of the AVS are as well-made as the outside! Everything is nicely integrated onto one main board, with the exception of the buttons/LED and the NES cart slot. Click the second two for full-sized pictures: 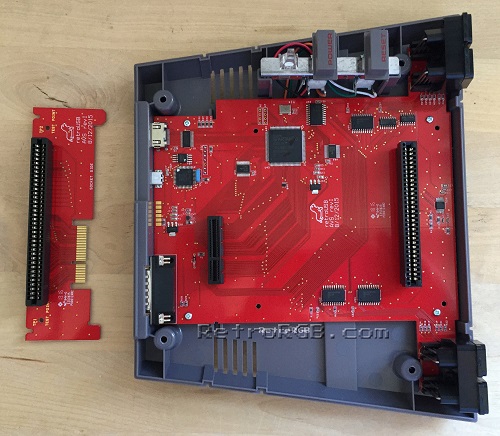 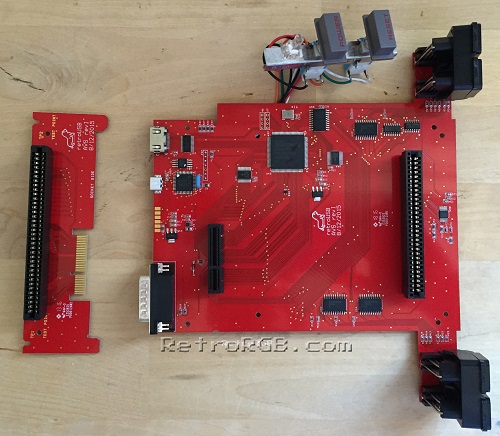 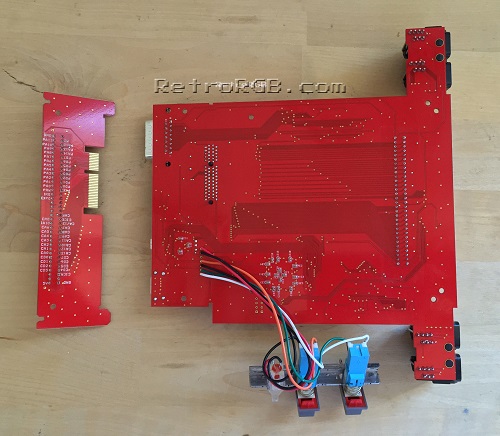 And finally, here’s the insides of the plastic shell: 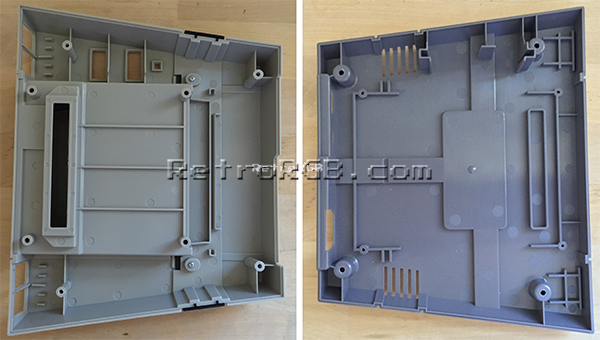 For the price this thing really performs. I would have liked to see more resolution / video options, a “stereo” audio option (I really like 50% separation of the NES audio channels) and in-game access to the menu’s. All things considered, that’s not a lot of complaints and it performed very well.

Also, 4K TV owners should have a excellent looking picture from the AVS, as the NES’ 240p output perfectly scales to 720p and 720p can integer scale into 4K (please see the 240p page for more details).  I had great results on my 1080p plasma, but unfortunately, not all 1080p TV’s scale 720p game content well, so your results may vary.

One problem I did notice with the pre-lauch firmware was occasional audio “noise”.  Once I updated to the latest version, the issue went away, so (like with most tech these days) make sure to update it the day you receive it.  The firmware update was painless and took less then a minute.

At the moment, the only other complete hardware NES solutions (not laggy software solutions like the Retron 5) that offer HDMI-output are at least twice the price. If you want to play on original hardware (nostalgia can be very important), or feel like you’d benefit from the extra features the other solutions provide, then you’ll want to do more research and see exactly what works best for you. It’s possible that many people will still prefer an RGB-modded NES/Famicom and a Framemeister, for it’s 5x 1080p scaling and other options. That being said, if you want a reasonably-priced solution that will work with you HDTV right out of the box, then this is definitely for you!