This page describes the original method of getting RGB-out from a NES.  There are currently much easier methods of getting true RGB-output from a NES, but up until 2013, this was the only way.  Unfortunately, I don’t have how-to instructions, as I’ve never personally done one (I had mine modded for me).  I do provide all the information you need to get started though.  Please read on, as I’ll give a description of how the mod started and what the PlayChoice-10 even is:

In the 80’s, Nintendo decided to make arcade consoles out of their games.  As a result, they invented the PlayChoice-10, which is basically an arcade cabinet that plays modified Nintendo games.  Since arcade systems used RGB monitors, they had to add a custom chip to the PlayChoice-10 game board (arcades have full motherboards to drive each game, not cartridges) to output RGB video.  This chip is called the “PPU”, or Picture Processing Unit.  People have discovered that you can remove those PPU’s from a PlayChoice-10 board and integrate them into a NES.  You can find those boards (or just the PPU’s themselves) on eBay ranging from $100 to $300.

Since the NES was designed with a composite color chip and the PlayChoice-10 arcade systems are based off an RGB color palette, some games look different.  Most are similar to the home system, but not exact.  Some games look amazing with the RGB color palette, such as Contra and Duck Hunt.  Others like Zelda and Mario 3 look different, but better or worse is a matter of opinion.  I included a ton of pics in the NES RGB Pics section so you can see the difference for yourself (as well as see the huge difference in clarity between composite and RGB NES output):

If you’d like to mod your NES and integrate the RGB PPU chip, you have two choices: install it yourself or send it out to be installed.  I don’t have the proper tools to de-solder chips from motherboards, so I decided to send mine to Game-tech.  There are other modders around, but do some research first before using them, to make sure they have a proven track record!  If you wanted to install it yourself, here’s a basic (but far from complete) rundown of what it entails:
– Desolder the NES PPU – The Hardest part.
– Install PC-10 PPU in its place.
– Build a circuit to drive the PPU.
– Build an output port.
– Hope you don’t mess up and burn out the chip you just spent a lot of money on.

Here’s a few pics of what Game-tech’s install looks like.  They use a Nintendo multi-out as an output port, so the NES looks like it came from the factory with the multi-out (very impressive).  You can use any port you’d like though: 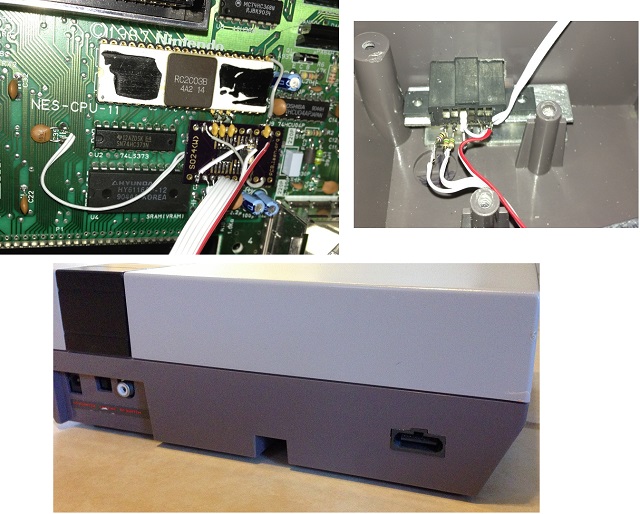 This site has tons of information and pictures if you’re interested in trying it yourself (scroll down for the pics):

Here’s a quick example of how much better the picture quality is, using RGB:

Feel free to go back to the main NES page, or the the NES HDMI / RGB mods page for more alternatives.  Also, please head to the home page or console info page for more retro awesomeness!