As described in the SNES Version Compare section, the 1CHIP SNES is the best version of the original Super Nintendo system.  I list a few tricks below on how to narrow your 1CHIP search, but the only way to be 100% sure that you have a 1CHIP, is to open the console.

What to look for:

Use a 4.5MM game tool to take the top off your SNES console.  Next to the cartridge input, you’ll see the board revision labeled “SNS1CHIP” circled in yellow in the picture below.  If you remove the metal cover plate (under the cartridge release lever), you’ll see the final verification you’d need:  The actual “1CHIP” S-CPUN chip, as well as the full motherboard revision (circled in red below).  Any 1CHIP revision is good:  -01, -02 and -03.  Click for full-sized: Compared to other models: 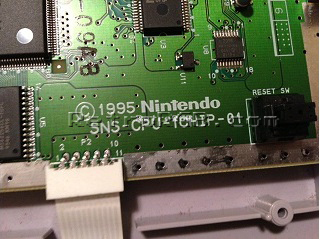 Other tips on how to narrow your search:

A few places have stated that PAL 1CHIP consoles are much easier to find.  I haven’t been able to test this myself, but it’s been said that if you remove the expansion door on the bottom of the console and it looks like the top photo (no dots), it’s a 1CHIP.  Click for full sized: Superfamicom.org also lists ways to use a few game’s debug menu’s to list what chips are inside.  This is handy if you already own one of the games listed, or if you have a ROM cart:  http://superfamicom.org/console-serial-database