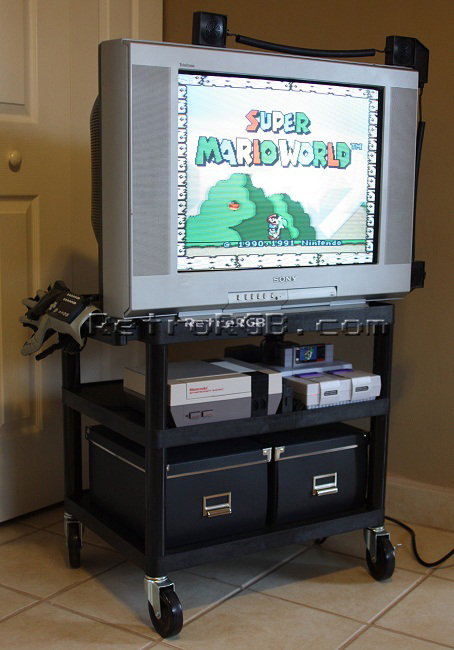 After I re-discovered RGB, I realized the retro cart was all wrong.  It needed to be bigger, so I can fit more systems on it.  Also, it had to be built around an RGB monitor, not a TV.  As a result, I decided to re-design the retro cart as the “Nintendo Cart” and sell it.  I spent a few hours transferring everything over, zip-tying all the wires and tucking everything in a way to make it something people want to look at and not just like a messy A/V cart.  Here’s the write-up I put on the eBay page:

Allow me to walk you through each part of the cart.  First, are the systems held up top, a Nintendo Entertainment System and Super Nintendo.  Notice the Super Nintendo is in great condition and not discolored.  In between the systems is the control box for the power glove: 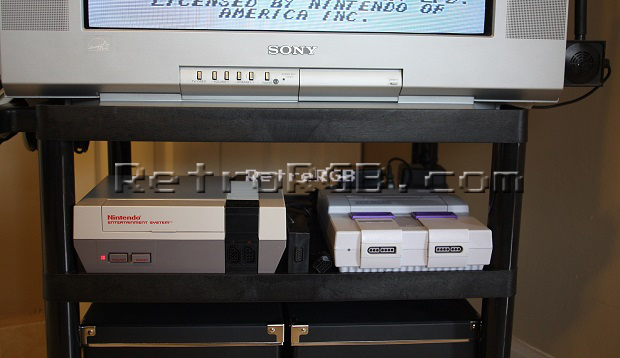 On top of the cart, is a really nice 24” Sony TV.  The TV was bought brand new by a friend of mine and he barely used it.  It needed some minor customization before it would fit properly, but now it fits like a glove:

On the side, you’ll find the Power Glove, mounted to the cart’s handle.  The Power Glove works just like new…but that’s not saying much, as the glove never worked the way it was shown on TV.  Personally, I find it to be an awesome decoration on the cart and fun for friends to try when they see it for the first time.  Other than that, you won’t use it much: 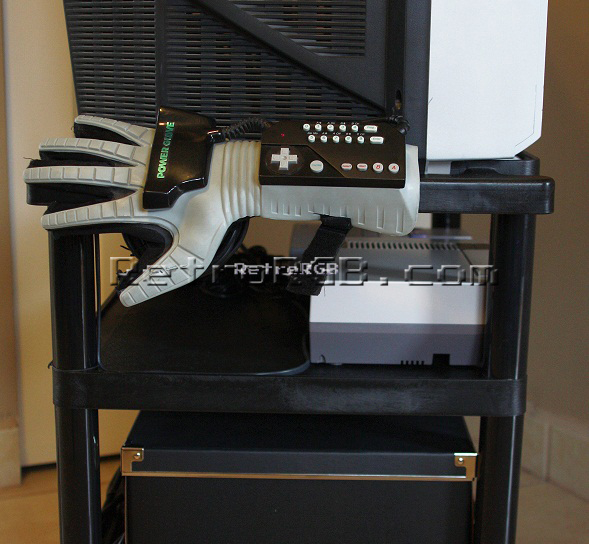 I also designed the cart so a Nintendo Wii can be easily added at any time.  Because of it’s technical capabilities, the new Wii U will be a much better choice to hook up to your big flat-screen TV than the original Wii.  When you get the new system, I highly recommend putting your old Wii into this cart.  Playing games like A Cave Story and Mega Man 9 on this setup will allow you to feel like you’re playing those new games on the original NES hardware! 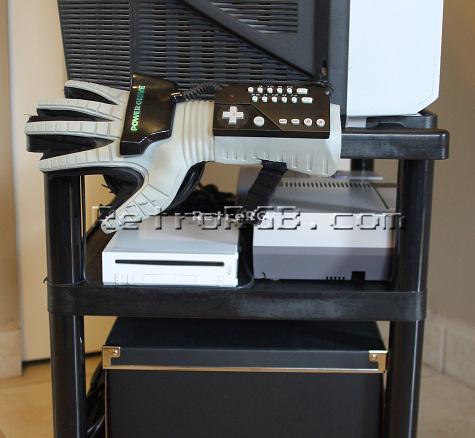 Here’s a shot of the back.  I really tried to make every angle of the cart look as good as possible.  I even used all black zip-ties and twist ties, so they’ll blend in and be almost invisible: 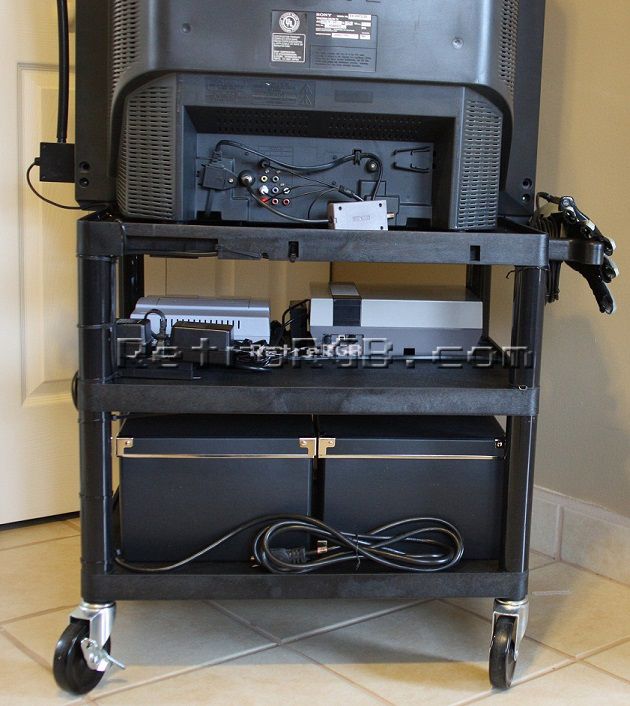 Here’s a shot of what the back would look like with a Wii (once again, a Wii is NOT included with the cart): 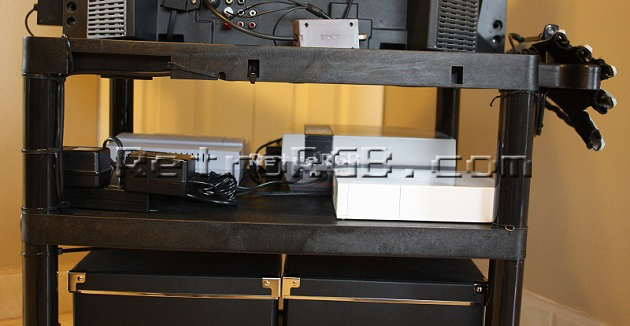 Next is a closeup of the A/V ports.  The Super Nintendo is hooked up via a high-quality S-Video cable.  This cable produces a much better picture than composite and makes your Super Nintendo games look amazing.

This TV has 480i component video inputs, which will allow for the perfect connection, should you choose to add a Nintendo Wii in the future.

The NES is hooked up via RF / Channel 3.  You may be wondering why I chose RF instead of composite.  There were a few reasons, actually:  The NES only outputs mono and the RF input automatically sends the sound to both speakers.  Also, this TV has a really high quality three-comb-filter that makes RF look 99% as good as composite.  Finally, using the RF for the NES allows the front A/V ports to be free, allowing an extra system to be hooked up, should you ever need to.  All things considered, it was the better choice. 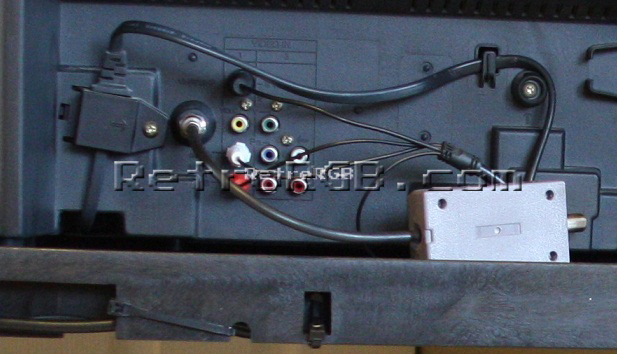 This side of the cart is my least favorite.  I tried so hard to make the cables and power strip look as neat as possible, but there’s no way to hide them completely.  It doesn’t look bad, but I wish I could have completely hid all the wires.  Maybe get yourself an AVGN to sit on top of it! 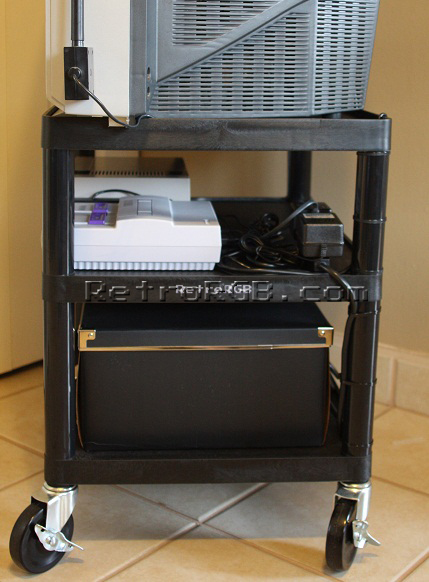 If I couldn’t make that side perfect, I could at least make the top of that side look better!  I used hot glue to secure the Power Glove’s cable to the inner-lip of the top shelf.  I then colored the glue with a black sharpie to make it even less noticeable.  It looks obvious in this close-up, but when looking from just a short distance away, it really blends into the cart.

For the record, I used hot glue instead of super glue, because hot glue can be easily removed without damaging the cord or cart.  Just pick it with your fingernail and it’ll pop right off.  If I used super glue, it would have left a residue on the cart and removing it may have damaged the cable.  Hot glue is totally safe! 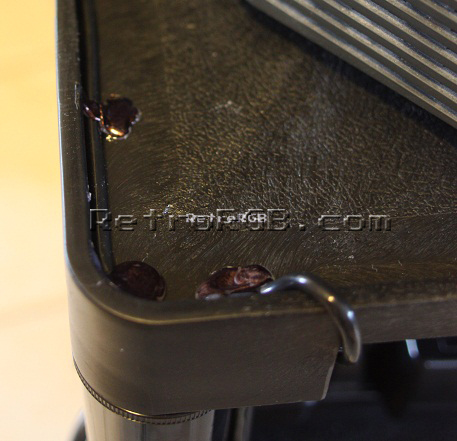 Finally, the cart comes with two matching storage boxes that are the perfect fit for your accessories, games and anything else you’d like to store.  It comes with everything pictured (plus a zapper) and could easily fit a large amount of gaming equipment: 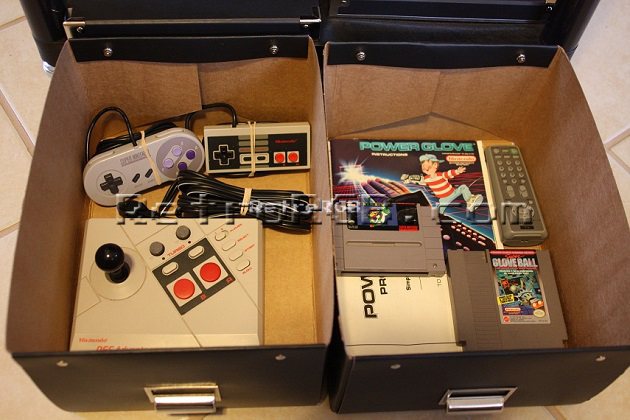 Here’s one last shot of the Nintendo Cart.  Under the pic is a list of specs and what it comes with. 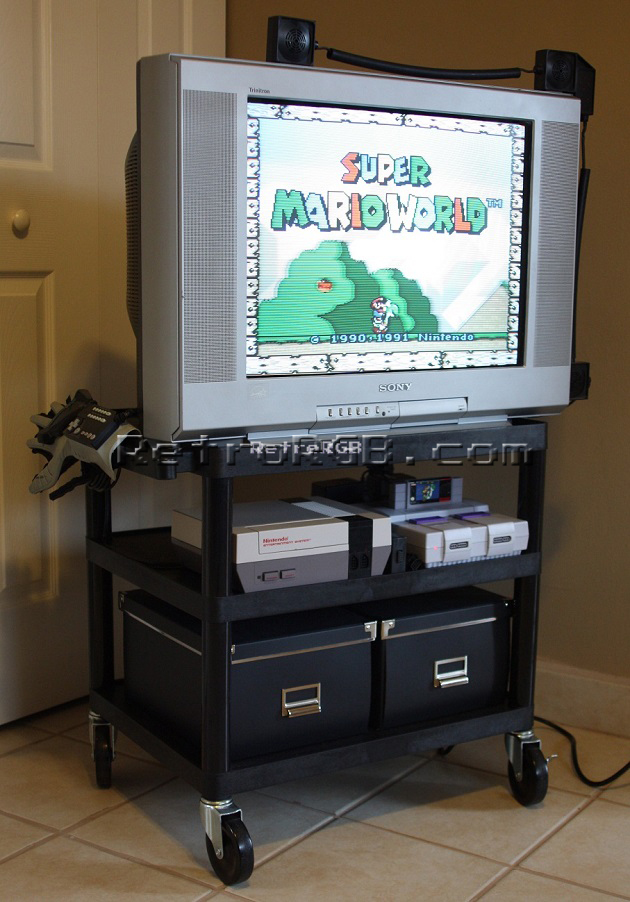 Fully customized A/V cart
– Shelves were height-adjusted to be the perfect height for the game systems.
– Bottom shelf has two storage boxes to hold all accessories.
– All cables are custom run and affixed to the cart, so they’re almost invisible.
– Comes with surge protector.

Sony 24” CRT TV, customized to fit the cart
– The TV has component, composite and S-Video inputs.
– It comes with a remote control.
– I have the service manual for it, make future tweaking easy.
– Component inputs make adding a Wii down the line easy and will provide the best quality for the Wii.

Super Nintendo system
– Mint condition system that is one of the rare SNES units that didn’t discolor over time!
– One regular SNES controller is included.
– The game Super Mario World is included.
– Includes the custom S-Video output cable which outputs a great picture.

Power Glove
– This is more for show…these things never worked well.
– It works as well as it did when new.
– Comes with all attachments and the instruction manual.
– Includes the game Super Glove Ball, which was originally bundled with the Power Glove.

Fully compatible with the Nintendo Light Gun and Super Scope
– Nintendo Zapper included!
– It’s rare to find a TV these days that’s 100% compatible and I can guarantee this works great with all the Zapper classics!