There was never a “Super Game Boy” style adapter for the Game Gear, as the GG produced more colors than the SMS’ palette could handle.  There’s a project looking to patch the games in real-time, but that’s still in prototype form.  If you have the ability to load ROMs, you can try community-made GG2SMS patches that change the color palette and map the Start button – See more info below.

As an FYI, many Game Gear games are simply direct-ports of Master System games, so playing those would be a better big-screen experience.  Here’s a list of all the GG-Exclusive games, if you’re interested:  http://www.retrorgb.com/gamegeargames.html

Patching Game Gear Roms
Some awesome developers have created patches that convert Game Gear roms to Master System.  These roms can be played via emulator or Rom Cart.  Each patch is applied by doing the following:

– Download the corresponding Game Gear ROM and rename it from “.gg” to “.sms”

– Use Lunar IPS to apply the patches to your rom.

There are sometimes disadvantages, such as palette issues, screen artifacts, or glitches, but if you already own a rom cart (or can flash your own cartridges), it’s an excellent way to experience those games on a big screen!

Game Gear on SMS/Genesis – More Info:
Game Gear games can be played on a TV via a TV-out mod, however it will be either stretched or windowed due to the GG’s native resolution of 160×144: 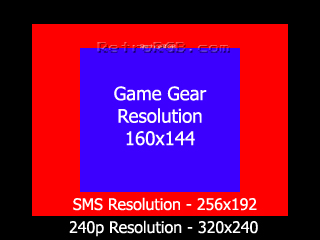 The biggest advantage of patching Game Gear games for use on an SMS/Genesis is that they can fill much more of the screen. They don’t always output the full 256×192 resolution that the SMS is capable of displaying, but they do fill much more of the screen than a Game Gear modded for RGB by ‘reframing’ the game’s perspective to display a wider area (click for full-sized pic):

There is currently a thread on the SMSPower Forums dedicated to the creation of these patches. I suggest anyone who’s interested check it out and hopefully be able to contribute:  http://www.smspower.org/forums/viewtopic.php?p=79131

Game Gear on Genesis:
I had always hoped developers would push the conversions a step further and patch GG games for use on the Genesis (instead of the SMS) to utilize the Start button and stereo sound could be utilized.  Although a bit ridiculous, it might also be possible to directly patch Game Gear games to 32x roms to utilize the extra colors the 32x supported.

Please head back to the main Game Gear page for more information.