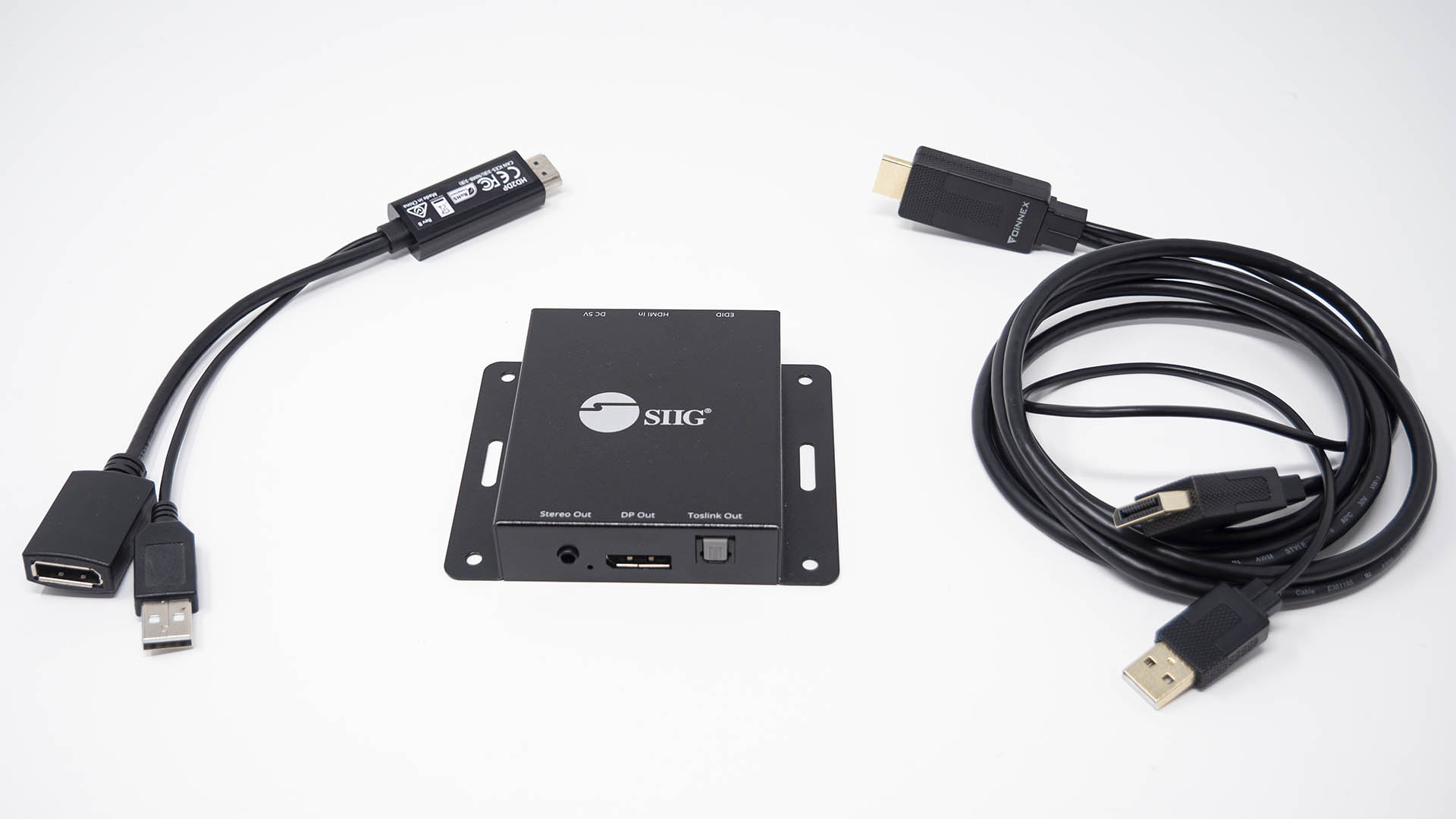 Are you looking to connect an HDMI device to something that’s native DisplayPort?  The most likely scenario for this, is a 4K computer monitor with both DP and HDMI v1.4, which is limited to 4K30.  I’ve personally owned an excellent monitor like this and while I was simply able to use DP from my PC to get 4K60, I wasn’t able to use HDMI-based game consoles or streaming devices in 4K60…until now.  You might also be using a zero-lag Zisworks monitor with no HDMI support at all, or maybe you’re crazy enough to use the lossless 4K Datapath VisionSC-DP2?  Probably not, but this is RetroRGB and we cater to all levels of nerds, so here’s a review of three different HDMI to DisplayPort adapters:

Before we begin, I want to clarify that these converters are specifically designed for devices that only accept a true DisplayPort signal!!  If you’re simply looking for a way to convert a DP connector from a device like a PC that supports the HDMI protocol over DP, you’ll just need a cheap connector converter.  Heck, you can even find DP to DVI-D cables that’ll work fine…once again, as long as the source supports HDMI over DP.

So, now that you know why you’re here, let’s take a look at each of these zero-lag devices.  I’ll start with the cheapest:

The Foinnex converter can be found for about $30 and works exactly as advertised:  Plug the HDMI port into your source and DP into your target.  There’s no way to extract audio, so you’ll either need a DP device that also accepts sound, or a quality HDMI splitter with audio extraction.

There’s a USB pigtail coming off the HDMI side for power, but it’s not always needed – Both cameras I tested worked without any USB power needed, however some other random devices did require USB power.  I would have preferred the USB power pigtail on the DP side, but overall it hasn’t been a big deal for me.  It’s also a low-powered device, so any USB power source should work, including just your PC’s USB ports.

I tested the usual devices through this:  A PC at multiple resolutions via full colorspace, as well as an unmodded SNES through the OSSC with optimal timings in all resolutions.  Everything worked fine except for one thing:  SNES via the OSSC in 1080p4x mode.  I’m not sure if the Foinnex just wasn’t programmed to understand 1280×960 resolutions, or if it was the odd timings of the SNES.  My experience has taught me that if a device or display has compatibility issues with one device, it probably has issues with others.  So, if you’re using this with standard HDMI equipment and a basic handful of consoles, you should be fine…but if you’re using this with classic PC’s and arcade boards, I’d expect some compatibility issues with a few resolutions.  You should be able to drop the OSSC down to 480p or 720p to fix compatibility, but I wanted to mention it anyway.  As a note, all output modes of the RetroTINK 5x were compatible with all three of these in both framelock and triple buffer modes…including the newest 1440p modes.

Also, capturing a PS3, or something like a game from an Apple TV was not supported.  If you’d like to use those devices, you’ll need a compatibility device like the aforementioned HDMI splitter with audio extraction, or HDMI splitter with port 2 downscaling.

One thing to note is this adapter sends a 4K60 EDID to the HDMI port.  I’m not sure if it’s locked to 4K60 since it’s the maximum resolution it supports, or if it tries to copy the EDID from a device and defaults to 4K60 if there is none, but there’s one extremely uncommon scenario you might run into as a result:  If you send certain displays or capture cards a 1080p signal with a 4K EDID, it could result in a monitor displaying the 1080p screen in the center, with no scaling and I’ve seen capture cards scale the 1080p signal to 4K, rather than switch to a native 1080p capture.  It wasn’t the biggest deal, but if you zoom into that capture taken from a test utility hosted on Fudoh’s website, you’ll see the changes.  Now, that’s a very niche scenario…but it’s exactly the type of weird scenario someone needing these adapters might run into!  Worse case scenario, you can buy an EDID spoofer for about $20, but it shouldn’t be an issue for most users.

Overall, for $30, I’d call this an excellent solution for someone who just needs a straightforward adapter.  I’d really suggest combining it with one of the HDMI splitters I mentioned above…but heck, even both together is $60 total and you end up with a second HDMI out.

Next up is the Siig converter.  PLEASE NOTE:  This review is of the model pictured above!  Siig had an older model that did not perform as well as this one.  Another note:  This is expensive at about $120.  The added features may be worth it for some users though, so let’s take a look…

The front side has an EDID button, HDMI input and MiniUSB power jack.  As usual, I love the USB jack (as opposed to barrel connector), as I can use any USB device to power this, including my PC.  The HDMI input alone might be an interest to people, as you’re not stuck with one fixed cable length like with the Foinnex.  And, the EDID button is really handy, supporting multiple modes.  They even include a sticker on the bottom to quickly reference which mode is enabled via the color of the LED below the button:

Being able to toggle between 1080p and 4K avoided any of the scaling issues I pointed out above, however EDID selection was often required.  For example, my PS3 wouldn’t work with this converter, unless 1080p/blue was selected.  Having PS3 support (as well as Apple TV) was a really cool bonus though!  It was a bit frustrating that I had to constantly toggle the EDID, but at the end of the day, it’s a small price to pay and no external adapters were required.

On the back of the unit is the DisplayPort output, as well as analog and digital audio outputs, which is handy for people using target DP devices without audio support.  I was able to test the SPDIF digital audio extraction using MDFourier and 2.0 stereo audio was converted flawlessly.  That means you can confidently use the digital output of this converter for MDFourier analsys, as it provides a 1:1 copy of the original.  I don’t have the ability to test 5.1 (or higher), but I imagine all SPDIF limitations apply.  For 2.0 though, it seemed perfect: 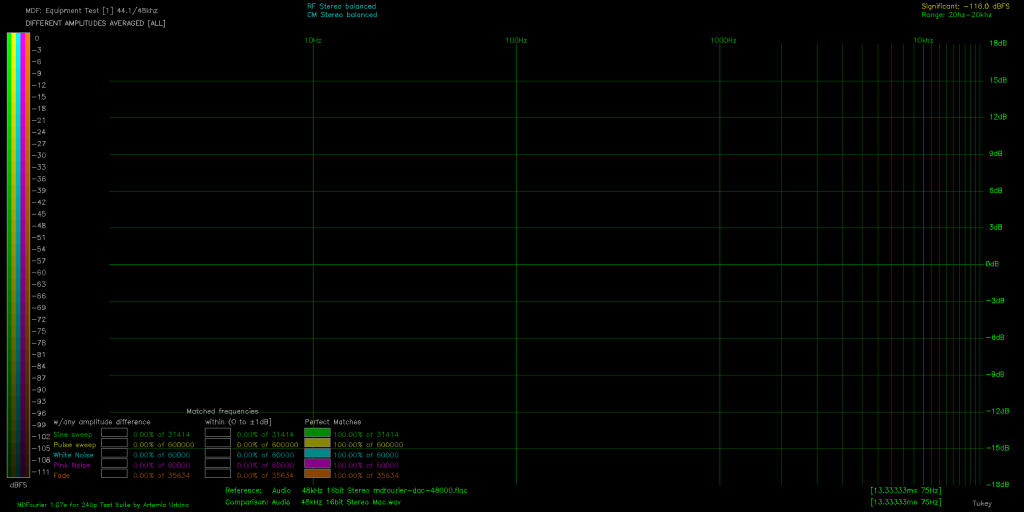 I also tested the digital to analog audio extraction and it should probably be considered more of a “bonus feature” than a reason to buy it.  Heck, even the cheap HDMI splitter/extractor performed better.  It’s definitely not something you can rely on for MDFourier analysis, but if you’re simply hooking up some PC speakers to get sound, it should be fine.  If audio is important to you though, I’d either get a set of speakers that accepts SPDIF, or get a separate, higher end DAC. 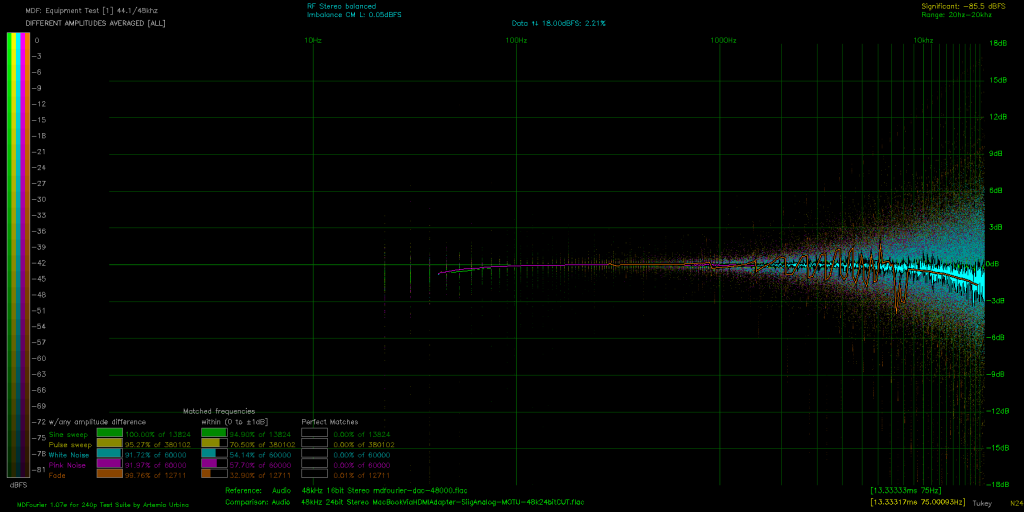 The las thing to mention is compatibility – And I couldn’t get it to fail with any source.  Arcade boards, SNES 4x, optimal vs generic timings – everything just worked.  Now, I don’t have the time and ability to test every source out there, but this was the only device that had zero compatibility issues, from SNES all the way up to Apple TV.  The only “blips” were the EDID on certain devices, but toggling between them always seemed to fix it.  Also, once the image locked in, there were no signal drops, it just worked.

So, if compatibility is your goal, the Siig is the clear winner here.  Unfortunately, it’s twice the price of the Foinnex + HDMI splitter/extractor, so OSSC compatibility and using one device instead of two are really the only reasons to chose this one.  I decided to keep this, as I’m constantly testing new equipment – In order for me to have a reliable and diverse set of tools, having multiple HDMI to DP adapters is kind of a requirement.  If I wasn’t using these in a “pro” environment though, I’d have probably stuck to the Foinnex/Splitter combo. 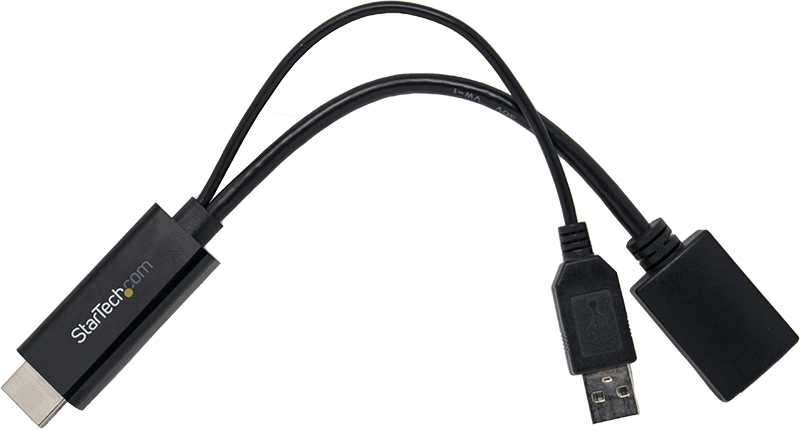 I wouldn’t recommend the StarTech HD2DP converter today, because it maxes out at 4K30 and is slightly more expensive than the Foinnex.  I think it’s still worth taking a moment to talk about though…

When I purchased the HD2DP a few years ago, there was only one other 4K HDMI to DP adapter out there and it was far more expensive than this one…and the only performance difference was 4K30 vs 4K60.  The StarTech – as well as every other adapter reviewed here – didn’t appear to change the video signal at all, with no color compression at any supported resolution. Performance was identical to the Foinnex (other than 4K30 vs 4K60 of course), including compatibility.  So, basically, everything I said there about HDMI splitters apply as well.

I even really liked the form factor, as it allows you to use any length DP cable you’d like…although once again, I’d have liked to see the opposite configuration:  USB power on the DP side, with a DP plug and HDMI receptacle.

So, overall, when I bought the StartTech HD2DP in 2019, I’d have called it “awesome”.  Now that you can buy the Foinnex for less, it gets pushed to the bottom of the list, however if you don’t need 4K60 (1080p60 works fine) and the other two are sold out, you can buy the HD2DP with confidence.

Well, that about sums it up.  I think the best solution for most people will be the Foinnex + HDMI splitter…and heck, even if you occasionally need an EDID spoofer, its still cheaper than the Siig.  If OSSC compatibility is important to you (remember you display still needs to be compatible as well) and you’d like one device with every features built in, the Siig is worth the extra money.