St1ka has just conducted an interview with the team behind Voyage: A Sorceress Vacation, a game we spoke about when it was released earlier this year.  As usual, St1ka’s interview was great and told a great story about a very cool new Sega Master System Game.

The game itself is a hack of Alex Kidd in Miracle World, but it’s really just using the main engine.  Everything about the game, from the graphics, to the music and even the full story are completely original.  The team is looking to do a physical release, however the patch is available right now;  All that’s needed are standard patching tools and a v1 or v1.1 version of the AKiMW rom: 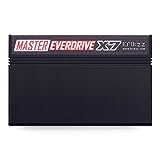