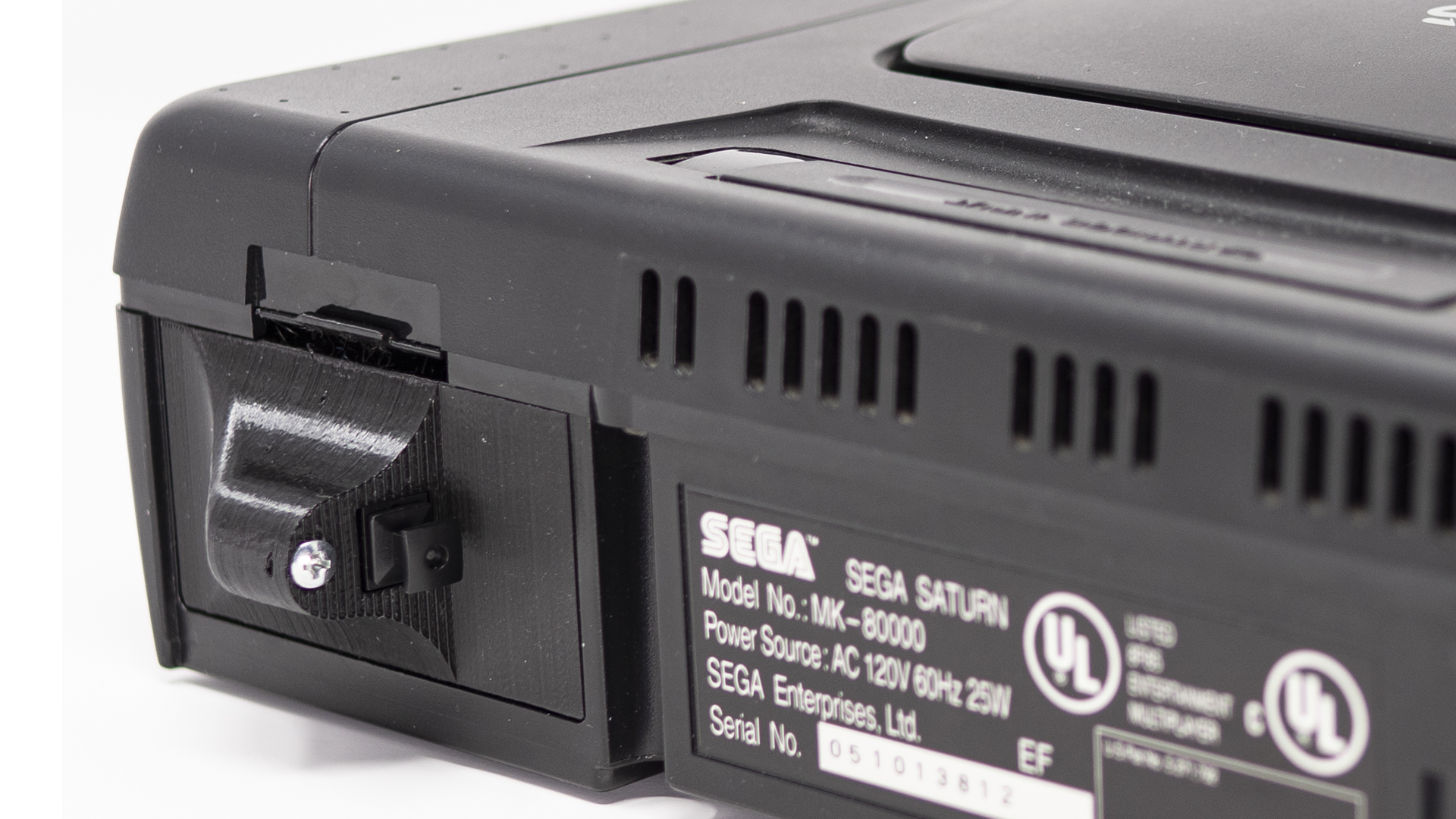 Greg from LaserBear has just completed a project that replaces the rear battery door in your Sega Saturn, with a 3D-printed door that includes a SPDIF jack.  This is designed to provide a convenient, no-cut solution for anyone performing a digital audio mod on a Saturn.  The kit includes the door and SPDIF board/jack, but does not include the board that actually performs the mod; This is the jack-only:

The mod itself is something I’ll talk about in another post, but today we’re concentrating on the door.  As for functionality, it’s a solid fit and was able to stay in place even with a thicker optical cable.  In fact, it might be a bit too snug at first until the plastic wears down a bit, but in my opinion, that’s okay:  I’d rather require a flathead to pop it out, then have the door fall off by itself with a bit of cable pressure! 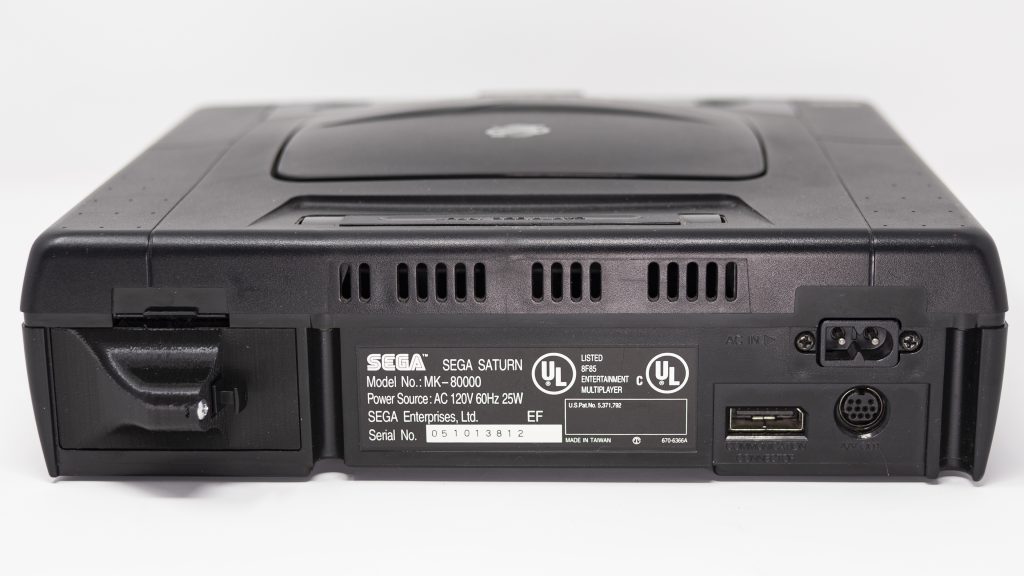 When using this door, it can be treated exactly like a standard SPDIF jack:  Just perform your mod the same way you’d already planned, but connect this instead.  Greg’s shipping it with a cable long enough to reach any of the standard mounting locations for the main audio board and all only require three wires:  Power, ground and signal.

PLEASE IGNORE THE TAPE IN THIS PICTURE!!!  I wasn’t feeling well and wanted to get this mod installed and tested, so I snipped the wires in the connector and soldered my existing wiring in it’s place.  I’ll go back and re-do it soon to look “picture-worthy”, but I still wanted to show the inside of the door: 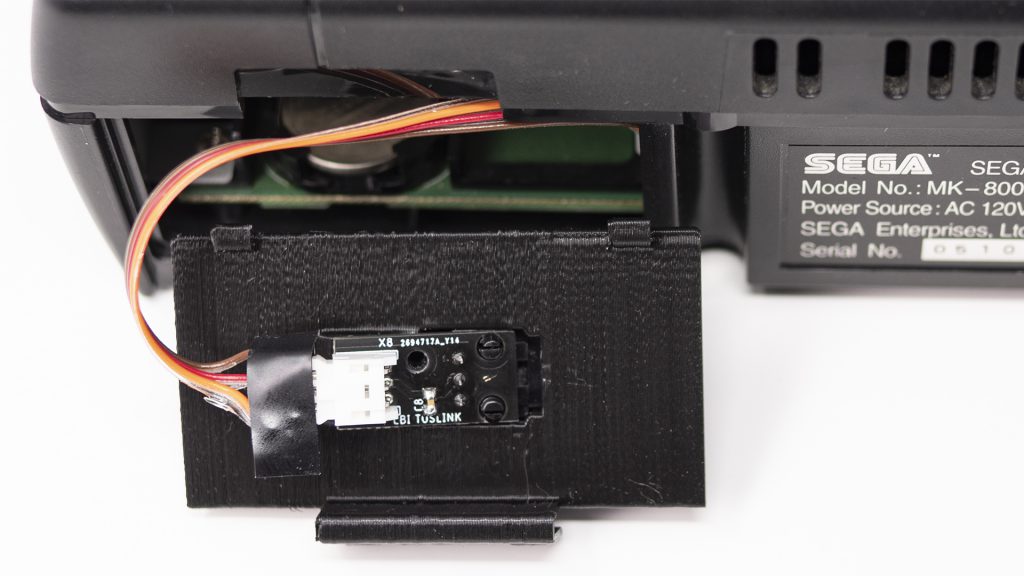 The only downside to this mod is it won’t fit with the Satiatior (and presumably MPEG card) installed.  While taking a quick look, it seems the PCB itself would be in the way and not just the connector.  It’s possible a future revision of the door might be released without the connector and with the board re-angled to fit the Satiator, but unless there’s a large demand for that, I don’t see it happening.  Also, here’s how the connector looked before I lazily hacked it up: 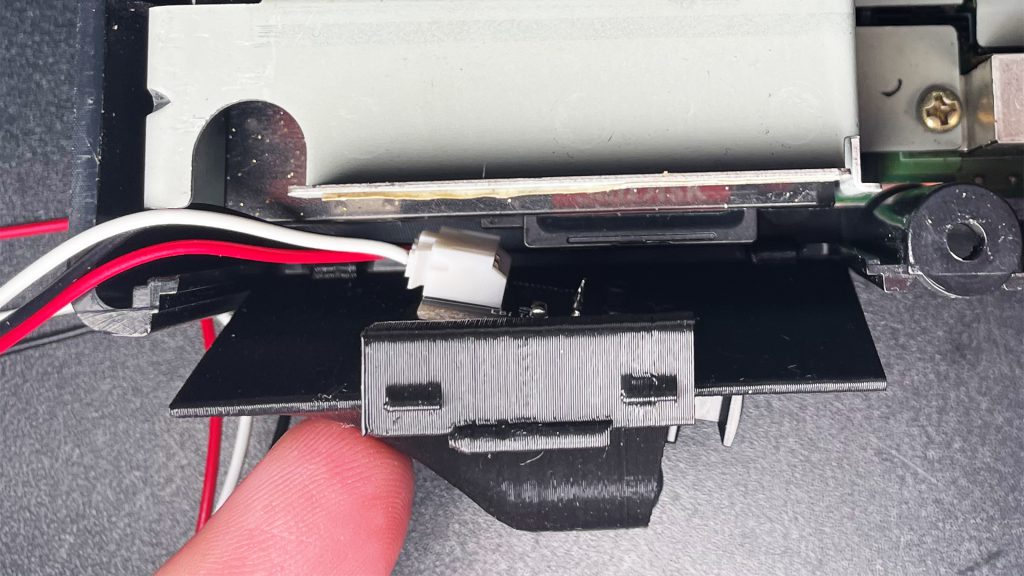 Overall, I’d call this SPDIF door a must have for anyone performing a SPDIF mod on a Saturn!  There’s just no other way to install a SPDIF jack without cutting and if there’s no reason to cut, why bother!?!?  There’s absolutely zero disadvantage to using this over cutting a hole in your Saturn, so you might as well pick one up!