Metal Dragon is yet another new game for the Sega Genesis / Mega Drive, this time courtesy of the indie Spanish MSX developer, Kai Magazine.

This is their time developing a game for the Genesis, though Metal Dragon did originally launch for the MSX 2 with this being a port of that title for Sega’s 16-bit console.

The game is a top-down shooter similar to classic releases like Commando, Mercs or Shock Troopers, though it also adds a comedic flare in the form of movie and Metal Gear Solid references.

St1ka (that’s me), recently reviewed the game and even checked the cartridge integrity, and we’re happy to say that the PCB is bevelled and even has chamfer edges, so it shouldn’t damage your system’s pin connectors.

If you want to learn more about the game itself, be sure to check out the review. 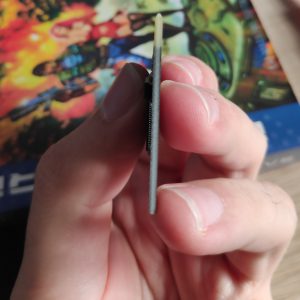 Liked it? Take a second to support st1ka on Patreon!