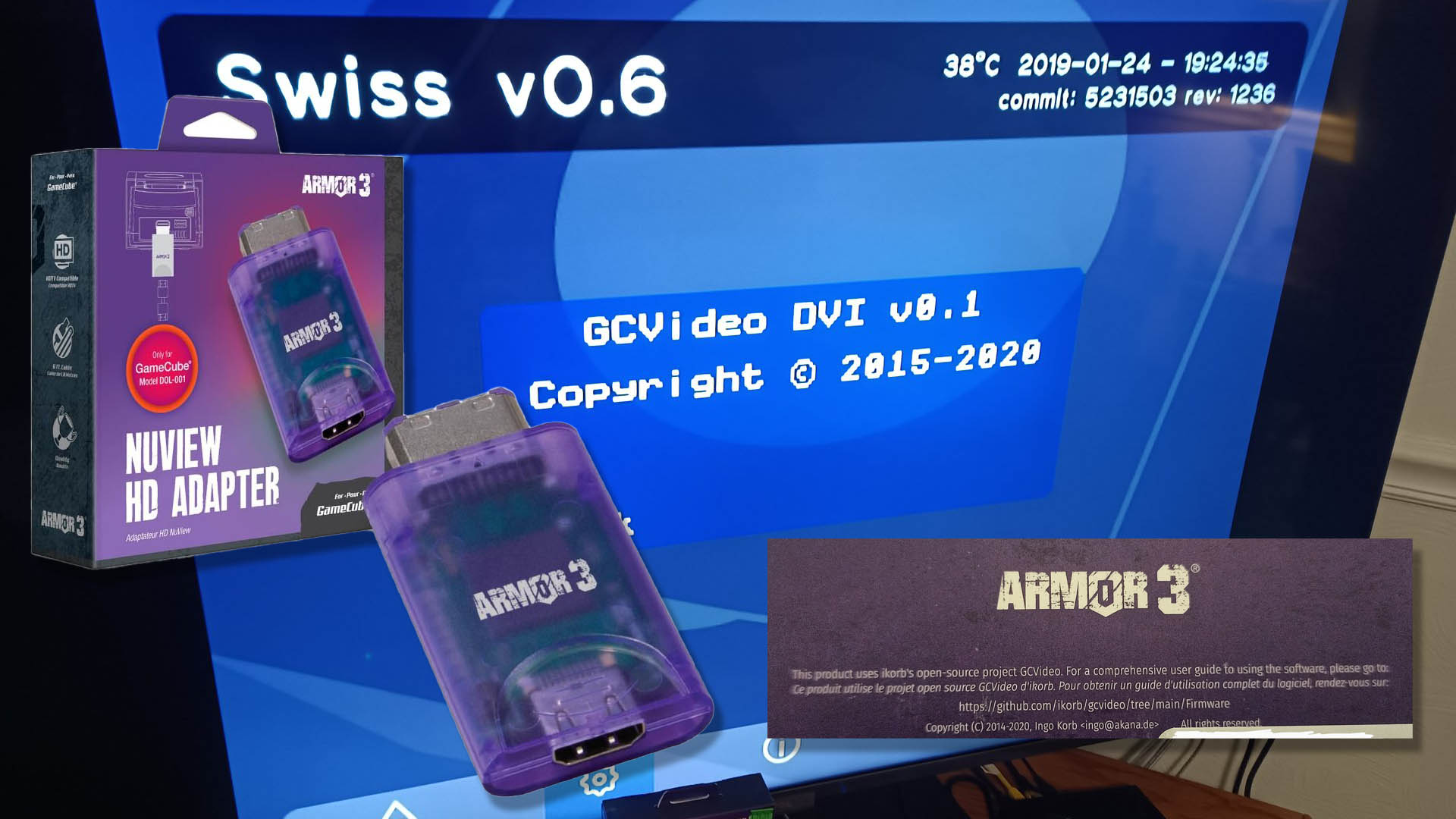 UPDATE:  Hyperkin has announced they will stop selling the product in question and Limited Run Games has removed the listing from their website.  This shows without question both companies are making an effort to support the community and listening to our feedback.  We should all respectfully take note of this – Everyone makes mistakes, but it’s how you handle them that matters:  https://twitter.com/Hyperkin/status/1480740171146428421

Here’s the original (January 10th) post for reference:
While this title of this post is true, I’d like to start out by saying it could be a lot worse:  No money is being “stolen out of a developer’s pocket” and while the piece of hardware in question is lower quality than other choices that are the exact same price, it’s still GCVideo.  The biggest problem with what happened – at least in my opinion (Bob) – is the repercussions going forward for open source, retro gaming hardware:  Will juggernauts like Hyperkin and Limited Run Games essentially kill the scene, stifling new products…and killing their own path to selling open source designs?  More info below, but first, here’s some links to quality GCVideo solutions, as well as the main project itself:

Hyperkin is now selling a device called the “Armor3 NuView HD Adapter for GameCube“, which is a GCVideo-based Gamecube-to-HDMI adapter.  The open-source code has been modified and all mention of GCVideo creator, Ingo Korb has been removed – this is where the open source terms have been violated.  It also has the software firmware update functionality removed and most likely can’t be updated even with hardware programmers;  To my knowledge, this is not in violation of the license, however companies like Limited Run Games are charging the same $80 for the device as alternatives that can be updated with the latest features, making this just about the worst choice available today for GCVideo solutions.

So, if the only thing that happened is Hyperkin removing Ingo’s name from the code and he doesn’t get paid for GCVideo sales anyway, why are so many people in the retro gaming scene up in arms over this?  Is it simply because it’s easy to go after larger companies like LRG and Hyperkin, or is there more to it?  Well, while I’m sure some people just like to make noise, the real enthusiasts in the scene are furious, because of the message this sends to creators and the community.

Back when Hyperkin’s Retron 5 was released, it was discovered that Hyperkin essentially stole the software emulation used to run their hardware.  Some of the software was open source, some closed source and some were open source, but used in a way that violated the license.  For some perspective, imagine if you’d spent thousands of hours spanning years of your life, just to have a big company come around and make a ton of money off of your work, without even a mention of your name???  This upset the entire retro gaming community and caused quite a few people to abandon open source.

Around the time that info was made public, I asked Chris Gallizzi, a Hyperkin product manager to discuss this on my podcast.  He graciously accepted and spoke openly and honestly about what happened.  Most importantly, he discussed the steps he’s taken to prevent something like that from happening again.  Check out the interview at about 17:50 (I used to combine interviews with news…it was dumb, I know):

Now, it seems this “Armor3” adapter might be a re-brand developed by another company, which would explain how it slipped through the cracks.  Regardless, Hyperkin is still responsible, as they’re stamping their name on it and that alone can be interpreted as a sign they’re still not taking open source seriously.  BUT, they did include Ingo’s name on the box, which means they might not have intentionally hidden the creator.  In fact, a rookie software dev not familiar with open source terms might have even thought they were doing a good thing, as since they modified the code, maybe they didn’t want the original creator to get stuck with support requests?  I can easily see something like that happening, but – once again – Hyperkin’s name is on it, so they’re responsible or checking it before sales.

The point of all this explanation is to provide facts and weight to the statement:  Regardless of if it was done by accident or with malicious intent, Hyperkin has once again violated terms of open source projects, while profiting off sales.  They have once again upset the community and caused developers to question if their projects will someday be used to build Hyperkin’s revenue without even a nod in their direction.

Why does anyone care that Limited Run Games is selling these?

LRG is a company some people just love to hate.  I’ve seen videos and posts that make valid criticisms of their business practices…which are usually followed by long, nonsensical rants, filled with wild speculation and harping on little things that don’t really matter.  I’ve spoken with LRG in the past and got the sense that – at least back when the interview aired – they were doing their best to be fair, all while still being able to grow their business – As as much as they’re fans of gaming, it’s important to remember this is a business.  I didn’t agree with some of their tactics, but they’ve since evolved their company and are inarguably doing great things…mostly.

While I’m not in a position to speculate on their sales practices, I do have the knowledge and experience to confidently say that their support of garbage HDMI devices is hurting the entire community – including themselves.  The issue is simple:  By promoting laggy, flickery solutions as casual ways to do something like “experience classic games from your childhood with your kids”, you’re setting false expectations.  You’re also forgetting most gamers aren’t hardware analysis nerds – They just plug in the HDMI device and think the game sucks.  They have no idea the reason they can’t time their jumps is because of a ton of variable display latency and no one outside of the niche hardware scene would know that headache-inducing flicker isn’t how these games are supposed to look, it’s a result of the “casual” HDMI solution.

So why does that matter for a cheap device?  Simple:  Most people who use them leave the retro gaming scene forever, thinking the games stink and they were just remembering them with rose colored glasses.  And we all lose.  That same customer might have bought many more of those HDMI cables for their other consoles.  And that might have led them to buying new CIB games on older platforms.  And maybe they wanted to learn even more, so they dug into the scene supporting other people’s work…

And not only are companies like LRG enabling that, they refuse to budge on the issue.  I’ve personally warned LRG’s Josh in the past about this, then offered to consult for free whenever they questioned retro gaming hardware they were considering selling, but was promptly dismissed.  And they’ve continued to sell these terrible adapters, which prompts companies like Hyperkin to make more…and now they’re also selling something that’s (accidentally or not) a middle finger to the very community they’re trying to profit from:  https://limitedrungames.com/collections/hd-cables/products/hyperkin-nuview-armor-3

I’m still a fan of LRG and I still regard Josh as someone I respect.  I just don’t know what else I could possibly do to be taken seriously.  This must be what scientists feel like when they hold up a globe and someone tells them they’re lying to hide the ice wall…

UPDATE:  Apparently Josh responded as I was finalizing this post and said LRG wouldn’t be selling these anymore.  I’m leaving my statement (and tease) above, both because it reflects my true thoughts on the situation and because I now deserve to eat crap for asking if they’ll do something they’ve already done.

Overall, while this isn’t blatant theft like we’ve seen with other notorious Kompanies in retro gaming, it’s all a step in the wrong direction.  The good news is Ingo isn’t loosing money from this (like what happened with some other Super gross scenarios), however the implications go much farther and I’m happy to see the community so vocal about this.  Hopefully the companies involved take it seriously as well.

Also, they’re all welcome to share their thoughts on a podcast with me, however I understand if they don’t – They shouldn’t feel the need to do some “apology tour” to justify any of this and I feel awful when people act like they should.  BUT, like last time with Chris, the dorr is always open for a respectful conversation and it would be ice to hear what happened…and hear if they care enough to make better decisions in the future.

If you’d like to know more about how to properly use open source licenses and why you should never support clone companies (Hyperkin isn’t a clone company, just saying ‘clone companies in-general)’, you might want to check out the following videos;  Both are also available as audio-only podcasts on all major services (just search for the title):

…and thanks to the community for the heads up:

Hey @RetroRGB, you might want to add this to the hall of shame products/a head's up. The Armor 3/Hyperkin Nuview. Not only I can't update to v3.1, but they have removed firmware updating altogether, hex edited a fake version number in & took Korb's name out. Returning this asap. pic.twitter.com/vU6NWuaYpM