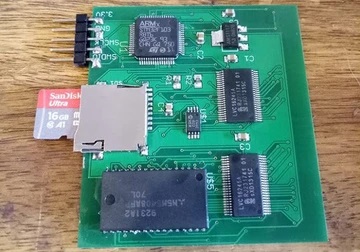 This Atari Lynx micro-SD based cart, follows Benn’s ElCheapoSD line of products‘ norm with its simplistic yet decently-featured nature and, as the name implies, its affordability.  The ElCheapoSD Lynx will easily fit into both revisions of Atari’s cult classic system, and covers its entire original game library, as well as most of its aftermarket homebrew catalogue. Very few homebrew titles can actually benefit from ElCheapoSD Lynx‘s on-board EEPROM for saving purposes.  Roms will load almost instantaneously as the biggest game, measured at 4 Mbit, boots in 1.5 seconds.

Here are some the cart’s features:

Expected to ship around June, with an included plastic enclosure (unlike the prototype shown above) the ElCheapoSD Lynx is conveniently priced at 45$. A few details are yet to be revealed about its overall functionality but this seems to be a competent solution for the Atari Lynx that can stand side-by-side with robust products like RetroHQ’s Lynx GameDrive and the AgaCart.

(as of February 2, 2023 – More infoProduct prices and availability are accurate as of the date/time indicated and are subject to change. Any price and availability information displayed on [relevant Amazon Site(s), as applicable] at the time of purchase will apply to the purchase of this product.)