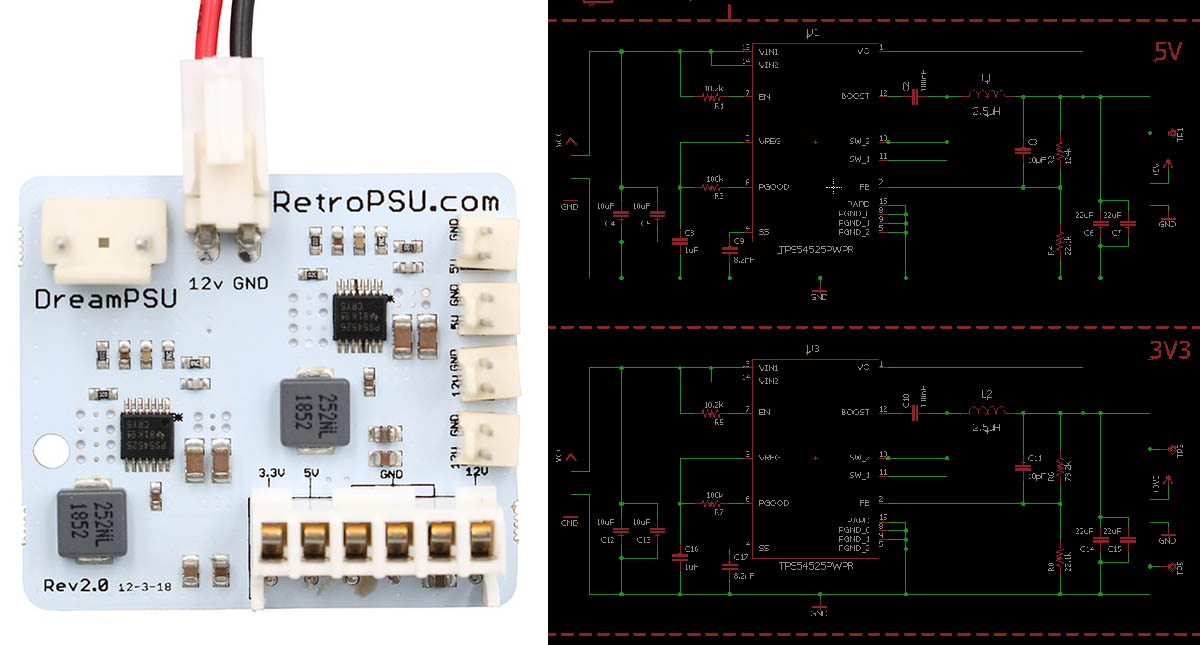 Lately, I’ve been hearing more people talk about replacing a console’s internal power supply.  Sometime’s it’s as simple as the original died and people have the skills to replace the power board, but not to recap and repair it, making a new design a convenient option.  Other times, it’s because people are looking for wordwide power support, which many replacement PSU’s offer if the AC-DC conversion is done externally.  I’ve also heard of people upgrading their PSU’s, because they think it’s an upgrade, which may not always be the case.

One replacement PSU that’s often talked about is the “DreamPSU” for the Dreamcast:  A device that replaces the original, internal PSU with only the DC-DC “buck circuit” converter, allowing you to use an external AC-DC converter of your choice.  Voultar recently took the time to analyse the DreamPSU’s design and was able to provide some interesting feedback.

First and foremost, I need to make the important point that as with all electronic devices, using a low-quality or under-spec’d PSU could kill your equipment!  That fact has nothing to do with the DreamPSU’s design, but directly applies to it’s use, as you’ll need to provide the external, AC-DC adapter for your region.

As to the DreamPSU’s design, it seems both the 5v and 12v buck converter is laid out almost exactly the same as the datasheet example for the circuit board.  Now, that’s not necessarily a bad thing, however those examples are meant to be a starting point for people to then customize to the target device.  This, respectfully, raises two questions:

Voultar took a look at the design and it seems the only customizations to the original manufacturer’s datasheet design are physical, as it’s designed to fit in the same area and plug into the same connectors as the original Dreamcast’s power supply.  That by itself is fine, as long as it performs well…but does it?

When testing under load with an oscilloscope, Voultar found the DreamPSU does not equal the performance of the original PSU.  So, what’s the real-world effects of this?  Well, if you’re using a high quality external supply that has good noise protection built-in, it could perform fairly well overall.  At worse you may notice video ripple or audio distortion, but it most likely won’t harm your console at all.  Of course, if you’re using a cheap external adapter, you can kill your Dreamcast…and once again NOT because of the DreamPSU itself, but because that’s ALWAYS a factor with electronic devices.

Another giant factor in this…and once again, in ALL electronic designs…is build quality.  Did the manufacturer use cheap components, or quality ones?  Even a flawlessly designed power supply can do some serious damage to your electronic equipment if junk components are used and it’s a safe bet that a cloned product from a cloning company on Aliexpress won’t have the best components in it.

Over the years I (Bob) have taken a huge amount of criticism for my warnings of power supply replacements, but I have never and will never back down from my stance:  You shouldn’t replace a console’s internal PSU unless you absolutely know what you’re replacing it with, or there’s no other option.  If you do have to replace it, make sure you use devices that were tested properly, under load, and with peripherals connected to the console.  In almost all cases, recapping and repairing the original PSU is a better choice and so far the only scenario I’ve seen that gained anything from using a replacement internal PSU is universal power support.  Even then (depending on the console) it might be cheaper to just buy a second console than replace both the internal PSU and external brick with high quality ones.  As a note, quality external replacements do exist, but consistence of manufacturing quality is always a concern; Is the PSU you bought today the same quality as the one you tested and verified last year?  Very often, the answer is no.

I’ve always taken the time to show people how I perform the measurements I do, so that they can verify my findings independently.  While I haven’t personally done any guides on testing power supplies, there’s some great resources out there for anyone with a scope who’s willing to try.  My intention in writing this article is simply to caution people about the general dangers of replacement PSU’s and encourage them to test replacement power supplies on their own, if possible;  The intent is not to ‘attack’ the DreamPSU.  I did want to set people’s expectations straight though:  The DreamPSU is simply a replacement for the original, not some miracle mod everyone with a Dreamcast should perform.  In fact, I have an entire video dedicated to mods I do recommend and this isn’t one of them.

Unfortunately, data like this has historically been met with pushback and even discussing someone’s purchase at all seems to anger people: “But I use a cheap PSU on my console and it’s fine” or “But a YouTuber with almost 100k subscribers said it was awesome!” are the angry responses I usually hear.  It’s always so sad to see that kind of ignorance thrown around and it’s equal to someone saying “My Dad’s been smoking for 30 years and he’s not dead yet, so smoking definitely isn’t bad for you.”  In all my years running RetroRGB, I still haven’t found a way to communicate to people like that, so I’ll just (as always) encourage you to check for yourself and end this here.

It appears that the DreamPSU isn't tailored for the Dreamcast, at all.

As a matter of fact… pic.twitter.com/GhU9vcylAK