Mike Chi has just released a new firmware update for the RetroTINK 5x that adds some pretty cool enhancements!  The video above walks you through exactly what you need to update the RT5x’s firmware.  Details about all of this firmware’s additions are below the link:

In the new firmware, when inputting 480p and outputting via 480p, or 1080p (both ‘fill’ and ‘under’ modes), an automatic phase oversampling is enabled.  You’ll know this mode is active, as the “H. Sampling” option of “Generic 4:3” will be replaced by “DTV 858”.  When this mode is enabled, the difference is very noticeable!  Here’s Guilty Gear X on the Dreamcast, via 1080p (under) mode – Click each picture for a full-sized view:

This new sampling also works in 1080p (fill) and while it’s a 2.5x scale, it’s still a noticeable difference in sharpness:

Another bonus to DTV 858 mode is that Dreamcast 480p signals will now be in the proper aspect ratio; The improper aspect ratio is a result of the Dreamcast’s output, not the RT5x.  In fact, most other scalers and TV’s process the DC’s signal wrong, but it’s now corrected through the RT5x.  Here’s the same Guilty Gear 1080p (under) shot as above, but in fullscreen:

Here’s another demonstration of the aspect ratio difference, with the usable area from the original firmware pasted over the current: 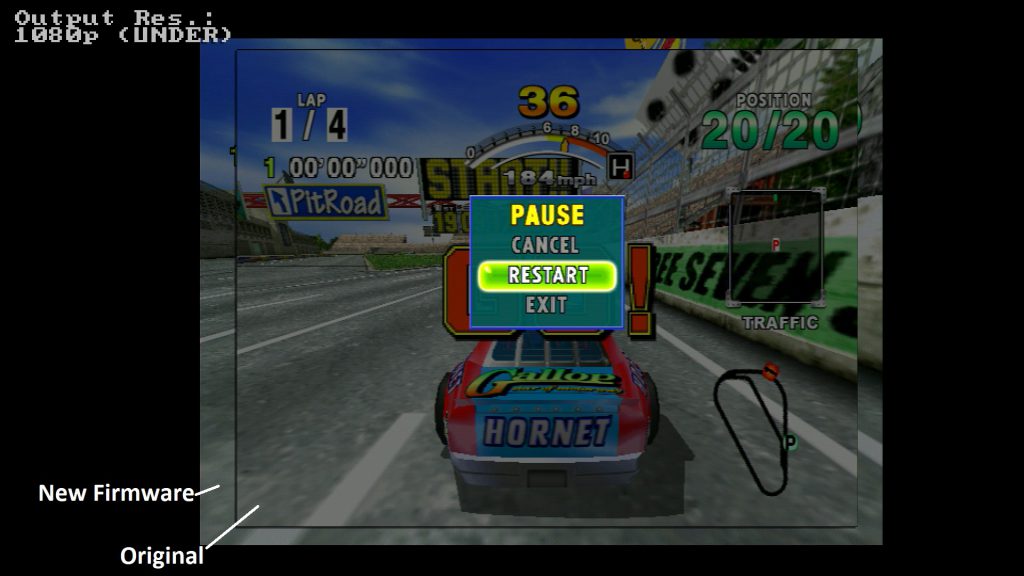 The first is the easiest example – Games that don’t fill the screen vertically like Gran Turismo 4 might benefit, since it’s mostly just cutting off unused screen space: 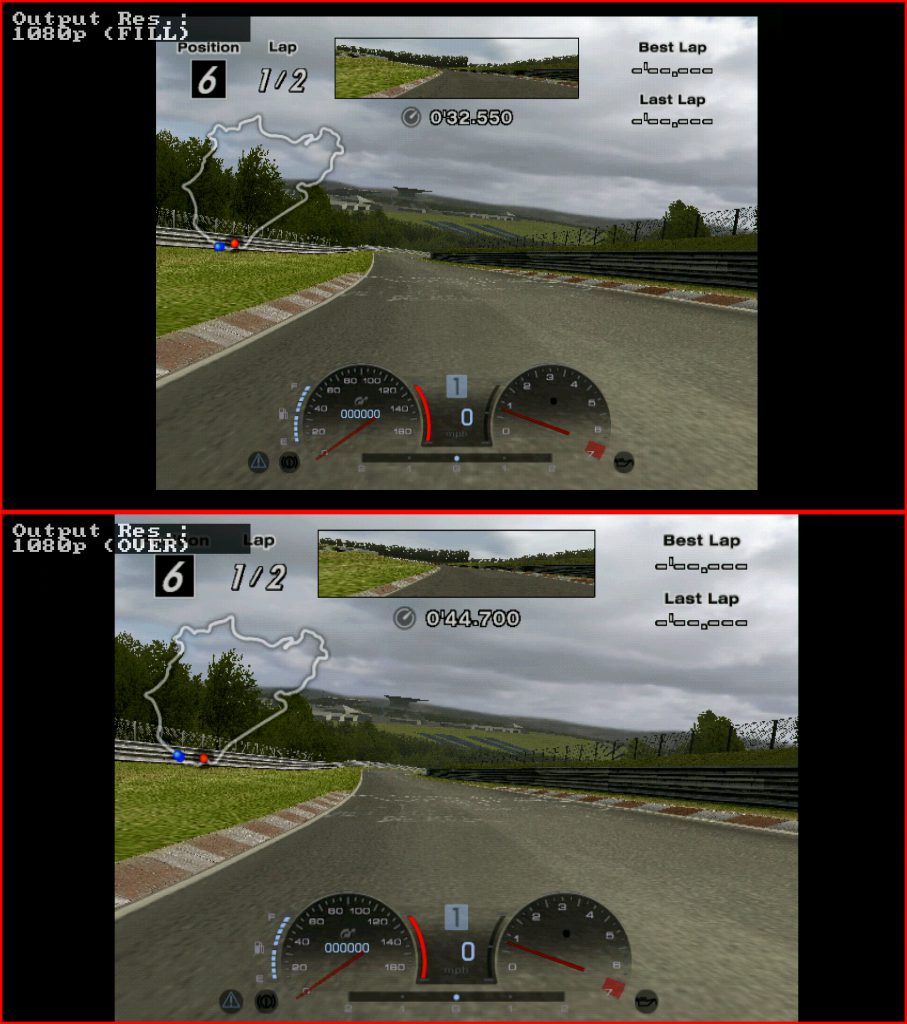 Also, even though many 480p games feel right at home on a flat-panel, most were still designed in an era where CRT overscan had to be accounted for.  Much like with 240p and 480i games, developers often intentionally centered their HUD’s to compensate for this, leaving mostly unused space on the top and bottom of the screen: 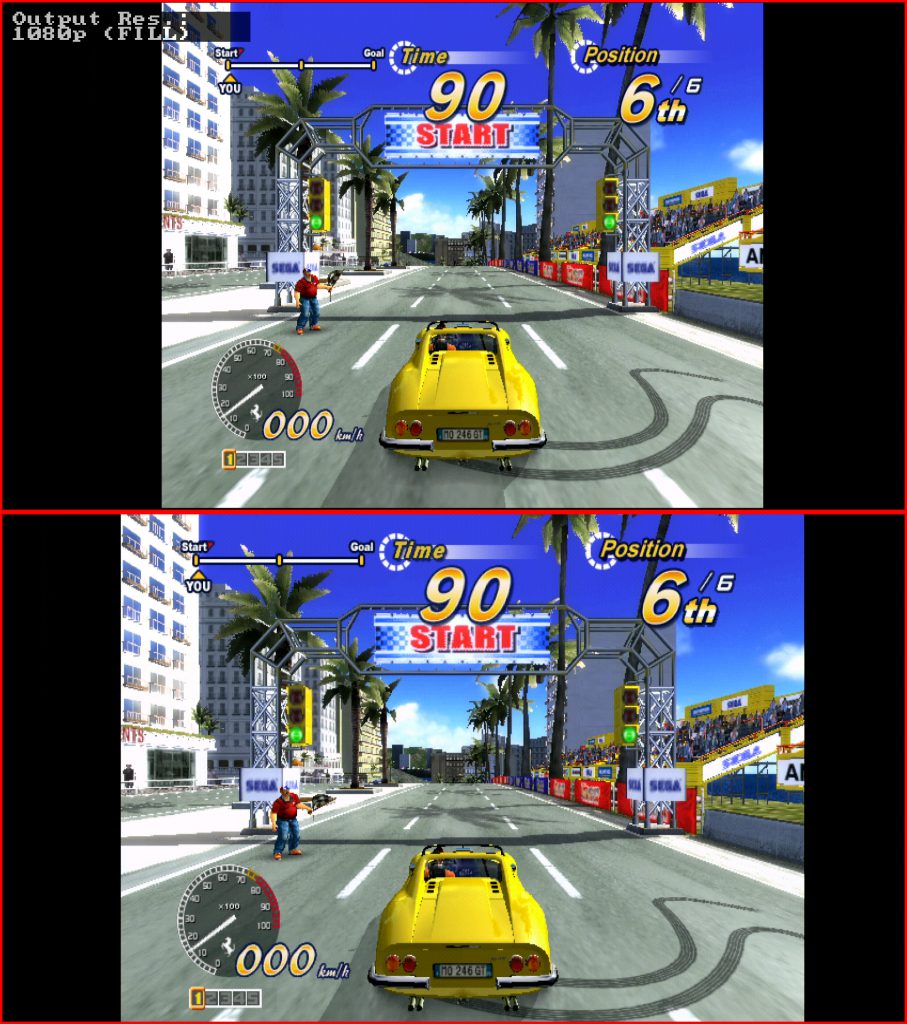 In the above scenario, I’d try both modes and see which looked better overall:  The sharpness of the “fill” mode’s new DTV 858 sampling, or the extra horizontal screen space being filled.

In the launch day firmware, some consoles like SMS and Neo Geo were having issues with sync.  Here’s a screenshot of the original firmware showing “sync curl” on my Neo Geo AES 3-6 with the original firmware, but it’s fixed with the new firmware.  The 3-6 is the most notorious version of the AES and constantly has problems, so the fact that it’s working here is a pretty big deal!

There’s a few more things Mike added to this firmware that wasn’t in the version shipped with the first batch, such as some fixes to 720p input signals in both upscaling and downscaling modes and the low-pass filter has also been improved, which should help performance of 15KHz signals.  Here’s the full list of changes, with the original review below: