Mike Chi has just released a new feature for the RetroTINK 5x that was previously thought to be impossible:  A smoothing filter!  This is great news, as the RT2x line of products had a smoothing filter that (in my opinion) really improved the early 3D graphics of PS1, Saturn and especially N64 games.  Many people considered smoothing the only feature “missing” from the RT5x and while this doesn’t work quite as well on 240p content as the RT2x, it’s still an awesome option worth trying!  Check out examples and a list of more additions to the firmware update below!

One thing to note, is the picture above was taken with the RT5x in “Generic 4:3” mode – The smoothing filter shouldn’t be used with the optimal timing modes, only generic.  While the smoothing isn’t quite as good as with the RT2x, I found the 1080p 5x (Over) resolution mixed with the filter to have a pleasing look.  And heck, it’s a free feature, so it’s worth trying!

The filter currently doesn’t work in 720p mode, but it has a nice effect with 480p games.  Its not quite the full AA filter that the mClassic offers, but it’s definitely a help for that generation of games.  The end result will vary based on the game and the output resolution you choose, so I suggest just giving it a try and seeing what you think!  The picture below isn’t quite a good example, as it’s only one game, but I at least wanted to show a basic example: 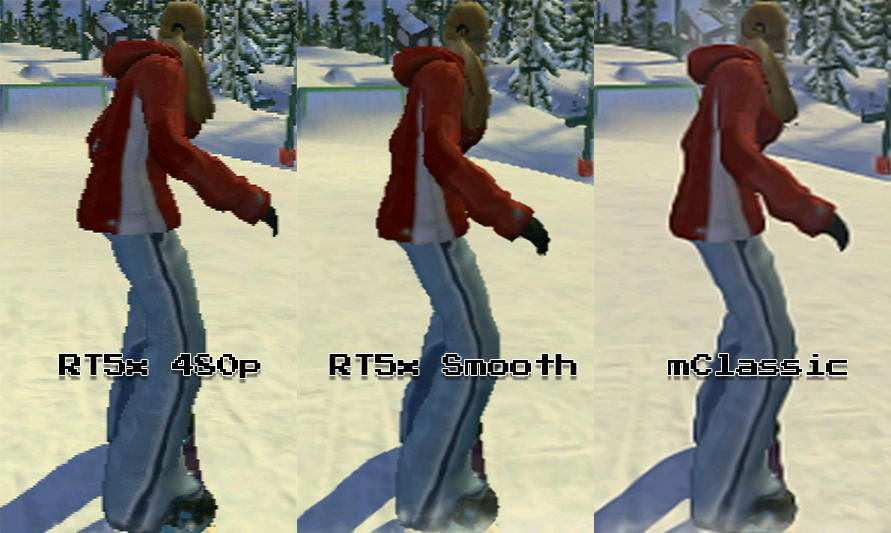 Here’s the full list of changes, as well as an interview with Mike below, where he claims this feature might be impossible 🙂