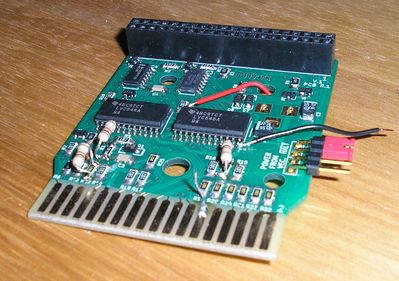 There’s a new project for Vectrex consoles that allows you to route a Raspberry Pi Zero…right through the cartridge port!  This is all possible, because the Vectrex’s cartridge port is granted access to pretty much the entire system, including the controls and display.  As a result, this project essentailly turns the Vectrex into an emulation-based vector monitor!

From the project page:

This project started when Graham (Toal) realized that the cartridge interface on the Vectrex included a HALT signal which would allow a smart cartridge to disable the CPU in the Vectrex and take over the bus, so that the controlling CPU could be the cartridge itself and the Vectrex hardware would only be used for its I/O capabilities. He originally thought that an interface card could be made that was nothing more than just wires connecting the Vectrex bus to the GPIO pins of a Raspberry Pi Zero, but on consulting a couple of group members with more circuit building experience he found that it wasn’t quite as trivial a problem as he hoped! However the underlying idea appealed to those experts and they volunteered to design a more realistic board that would behave as hoped. At this point the PiTrex team of Graham Toal, Kevin Koster and James Churchill was formed.

This means that any vertically-oriented vector-based arcade game can be played right on the Vectrex, while using it’s built-in controller.  Hopefully USB-based controllers can work as well, so we can have a fun way to play the arcade version of Tempest on a true vector monitor…albeit in black and white.  Funny enough, you can also use this project to run Vectrex roms via a Raspberry Pi-based Vectrex emulator.  I’m not sure if being software emulation would change the experience at all, since the console should be old enough to emulate at pretty much full speed.

There’s also potential for completely original games to be developed for this platform and there’s already one demo available!  Graham posted a few clips of the project running and I embedded a few videos – Including the homebrew game below.

At the moment, there’s no place to purchase a kit, but I hope they continue to work on the project and someday offer completed units for purchase!  Check out the main page here:  http://computernerdkev.heliohost.org/pitrex/wiki/index.php