The Mother 4 Fan Game team have released their trailer detailing what their upcoming game will look like.  The title is an unofficial sequel to the Japanese-only GBA game Mother 3, itself a sequel to the game released in the west as Earthbound on SNES (and later ported to GBA):

The footage shows the teenage characters Aaron, Maggie, Troy, Jared and Trisme, and some of their adventures as they travel across the United States battling a strange assortment of enemies using physical attacks as well as Psi to defeat them.

The video footage shows off some of the rhythm based attacks that featured in Mother 3, as well as the rolling health in Mother 2 / Earthbound.

The art style and character design appears to be both unique to this game, but also demonstrating a clear link to many of the designs used in the previous games.  Especially wonderful to see is this image, which appears to be a 3D render that mimics the physical models used during the advertising of Mother 2 / Earthbound: 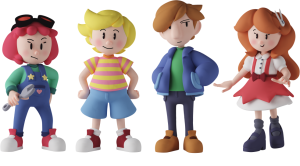 While Nintendo are well known for shutting down fan games of their IP, the team state on their website FAQ that they are less worried in this instance, as they are a hypothetical sequel rather than a direct remake.

To keep up to date with their announcements, check out their website:
https://mother4.org/