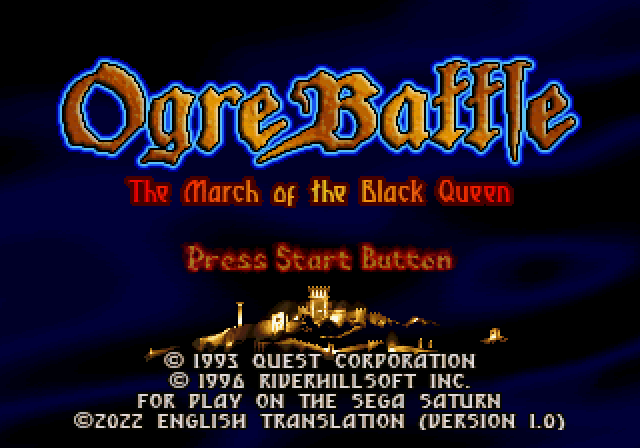 “The translation is partially ported from the PS1 version of the game, as it has undergone edits and improvements. The Saturn version has a number of improvements and additions compared to other versions of the game (SNES / PS1): new scenarios, additional music tracks, unique characters, mini-map, different endings, etc… Also, there are no in-game loading screens in this version (only when loading a saved game).” -Aishsha / Blog Post

As part of the translation of the game, the following innovations were also implemented:

NOTE: This patch works ONLY with an OEM Wired Saturn Controller at this time, due to a new translation select menu that has been added to the beginning of the game. NO SUPPORT for 3D Control Pad or Retro-Bit Wired/Wireless pads at time of posting this. This will be addressed in a future update…

This is a complete English patch for the Sega Saturn port of Ogre Battle.
The project was supposed to be a fast and easy retranslation at its onset, but it eventually transformed into something more. The PS1 script has been ported over to this translation, but later it was heavily redone, with most of it taken from the scratch due to inconsistency, lack of details and sometimes apparent laziness of the official translation. We tried making it as close to the official canon as possible (by taking the PSP lore version as the basis). The script has been reviewed for accuracy and edited accordingly. Another small note is that this is one of those games that fell victim to extreme religious purge to fit it with a younger audience or whatever. The final translation uses the exact lore that was originally meant by the developers since we tried and did bring it back to the roots, so to say. Also, the text of additional scenarios was completely translated. The Saturn version of the game has mini map, additional scenarios, musical compositions, characters, endings etc. More information on that can be found here: https://kahran042.livejournal.com/57736.html
Please note that the game currently has emulation issues on Mednafen that results some backgrounds are shifted to the left. These issues are not present on the original hardware.
The technical details are as follows: