I just received my copy of Life On Mars – A “Metroidvania” style adventure game, I purchased for the Sega Genesis.  I liked the game, but there were quite a few things that bugged me about it.  I wanted to do my own review, but I also wanted to link to one that’s mostly positive for an alternative perspective.  Luckily, Onaretrotrip just posted their review (above) and I really think that’s the one to watch.  I’ll post my thoughts below, but the one thing I’ll mention here:  This game is only available as a physical cartridge and the developer has no intention of selling it as a ROM to prevent piracy.  So, think twice about dropping $75 on this…

Before my “review”, I just want to note the package was good quality and the PCB did have a beveled edge, making this safe to use in your consoles!  I really appreciate when dev’s take the time to get this right! 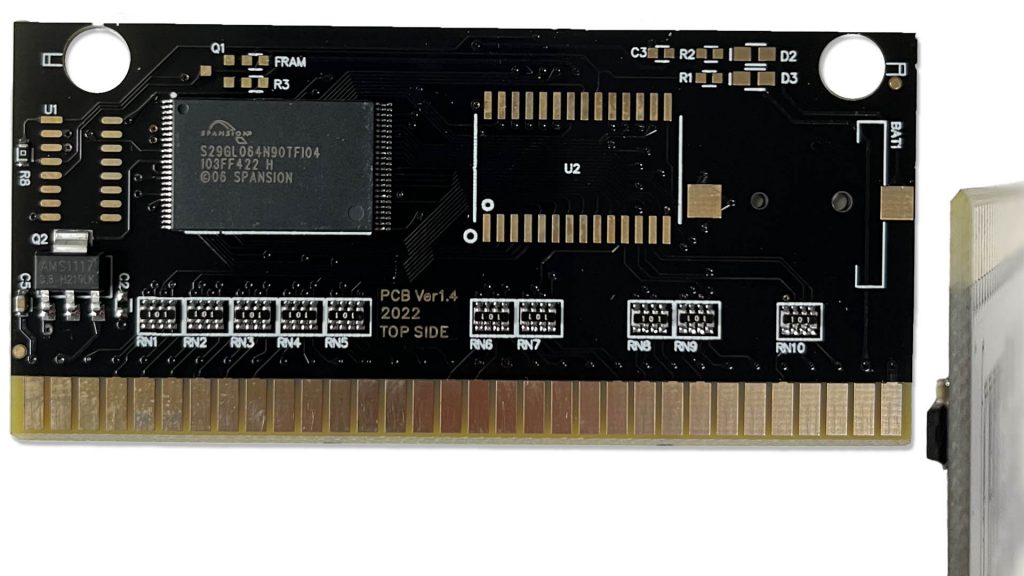 Before I begin, I want to remind you that opinions are subjective and you may disagree and love the game!  Heck, maybe I’m just super-picky about my favorite style of game…or maybe I’m in a grumpy mood and would love it if I played it another time???  Either way, here are my opinions, about four hours into the game – WARNING:  Some spoilers are in here!!!

First, I agree with Onaretrotip that it felt like more of an “exploration run & gun platformer than a Metroidvania”.  That’s not a bad or good thing and it still has some Metroid-elements to it, but I wanted to point that out.

The next thing I noticed is there really isn’t any “music”, just ambient sounds.  While that might be an artistic choice, the Super Metroid and Castlevania soundtracks are legendary and part of what made those games so interesting.  I would have loved to hear an amazing soundtrack, using the Genesis audio chips.

…and maybe the reason a new soundtrack wasn’t made for the Genesis is because this was ported over from the original MSX release?  I must have misunderstood when I wrote my original post promoting this game, as I thought it was made specifically for the Sega Genesis.  Totally my fault for not researching fully before writing that post, but apparently this game is seven years old and made with some assets stolen from Metroid (admitted by the creator):  https://www.msx.org/news/software/en/life-mars-kai-magazine-released

There are some cool weapons you’ll acquire, but your original gun is never really upgraded significantly.  This was super disappointing, as one of my favorite things about the Metroid games was how you can backtrack through earlier sections with an upgraded gun an blast the heck out of everything.  While yes, you can “level up” your gun, it never feels like an upgrade, cause it’s such a slow progression.

Some bosses had patterns to learn, which is always fun!  At least one boss didn’t have a pattern though – I basically had to blast away at it and run THROUGH it taking damage to get to the other side and continue blasting.  There was no way to jump over it and no pattern I could find.  Onaretrotrip couldn’t find a pattern either and showed this at 8:52 in their review.

Speaking of jumping, that never felt as satisfying as Super Metroid and there were other issues with the controls as well:

The controls felt off to me.  I think the best way to describe it would be that it feels more like the controls of a game you’d find on the NES, not a 16-bit system.  Here’s some things that really stood out:

I also found a bunch of things in the game that felt like “bugs”.  I mean, some absolutely were, but maybe others were just my perception?

I still plan on finishing this game and I absolutely do NOT hate it.  I just think it didn’t feel as polished as I expected…especially considering the cartridge-only purchase option.  If I paid $10 for this ROM, I think I’d be far less picky, but $75 isn’t cheap for a game that was originally on the MSX and just ported over to the Genesis.  I really hope the creator re-considers releasing the ROM before some hacker dumps it anyway.

Either way, this will be the last physical game I purchase from Kai Magazine – I’ll gladly try another one of theirs if a ROM is available to purchase, but I’m not at all a fan of forcing people to buy a buggy, physical copy.