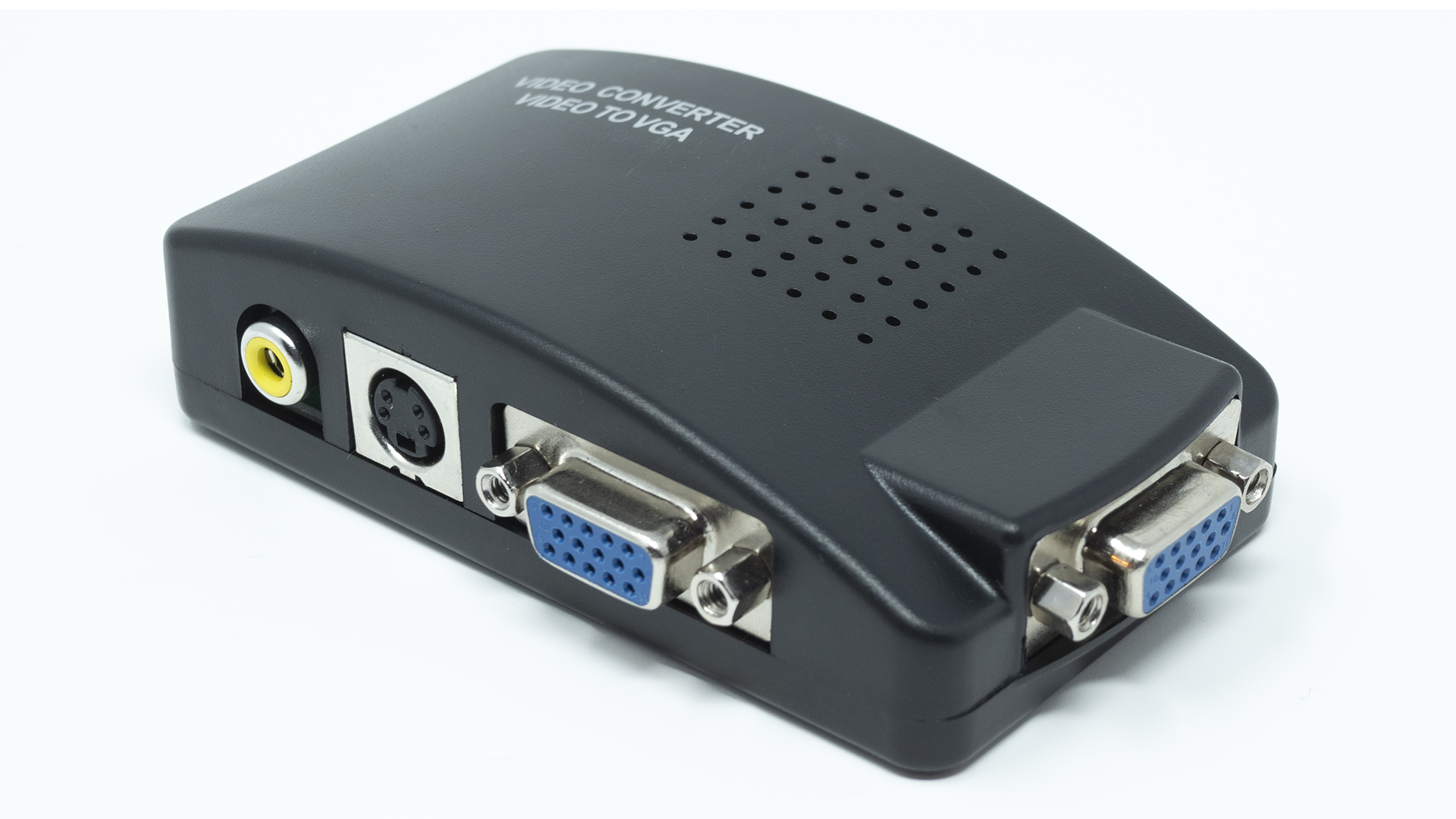 A few days ago, a friend of mine sent me a YouTube review of an “S-Video to VGA” device someone used with their Commodore 64 and wanted to know what I thought of it for use in that scenario.  I’ve upgraded all my equipment since the last time I tested one of those, so I figured I’d order one and see how it performed!

Link to the converter I purchased*:  https://amzn.to/38pPcFJ
RetroTINK Products (a better option in almost every scenario):  https://www.retrorgb.com/retrotink2x.html

The results were the same as my original tests, but now I’m able to provide more precise results:  Basically, it’s another “TV” scaler and in most cases, shouldn’t be used for gaming.  There’s still a few reasons you might be interested in this, so check out the review below for more info! 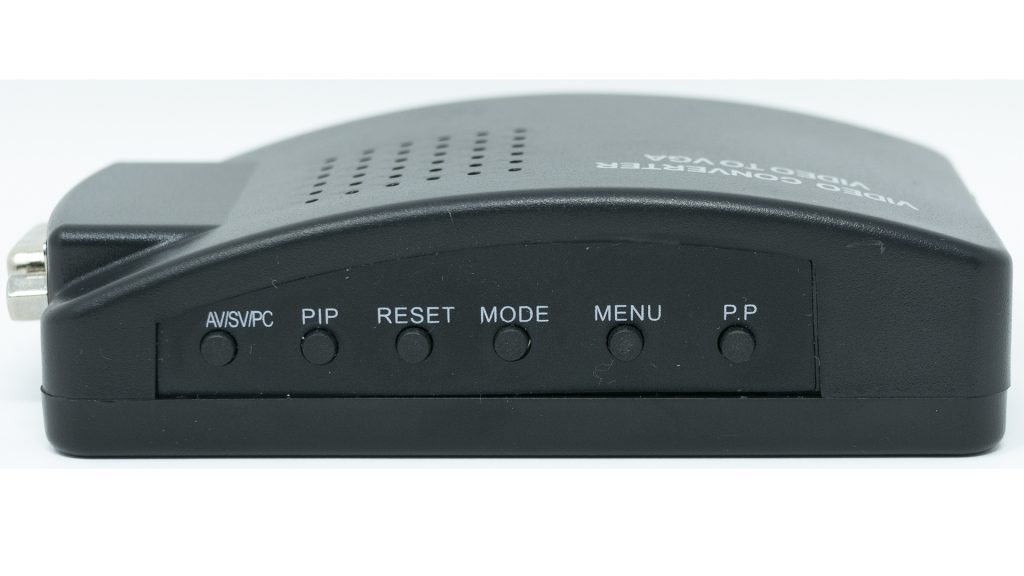 The first thing I noticed about the converter, was that the on-screen menu was in Chinese!  I’m not sure if they all ship like that, but I was able to use Google translate on my phone to fumble with the menu button until I found something that my phone translated as “English”.  You may have to do the same (I believe this screen says “Contrast”?):

After I got it running, I used my Time Sleuth and lagless converters to see how much latency this thing has.  As expected, it ranged between one and two frames of variable lag;  Not nearly as bad as some other scalers, but not something you’d want to use for serious gaming.  As a note, the VGA passthrough appeared to be a true passthrough mode with no processing done and measured zero lag: 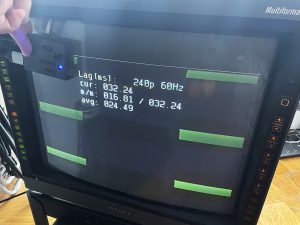 Next, I wanted to see how it processed the “240p” resolution over the composite and S-Video inputs.  See, 240p only exists in the gaming world, as all television and movie signals sent over composite and S-Video are 480i – An interlaced resolution.  “240p” was essentially a trick game companies used to get a flicker-free, progressive scan image on your CRT TV.

The easiest way to test if 240p is being processed correctly, is by running the “drop shadow” test in any classic console version of the 240p Test Suite.  If the cursor is transparent and looks the same still as when it’s moving, that means 240p is processed correctly.  If it looks like a solid, striped image when still, the processor is trying to deinterlace something that was never interlaced to begin with. 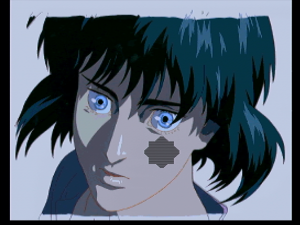 As with most of these TV scalers, it appears to treat 240p as 480i;  The image on-screen looked exactly the way it does in the still picture above (click for full-sized).  Improperly processing the signal this way can cause a flicker in games and any movement or scrolling on the screen can look weird enough to distract from use.  As a note, if the signal was processed correctly, a still image wouldn’t be a good representation – You’d need to see a video of it for the transparency effect to be seen.

I checked out the menu options and while there was unfortunately no “game mode”, there were some cool features.  First were all the output resolutions supported.

I connected the VGA output to my Datapath Vision E2S to verify resolutions sent and pressed the “mode” button to cycle through each one.  To my surprise, there were actually many more options than listed in the manual and on the Amazon page!  A few even had both 60Hz and 75Hz modes!  Strangely enough, standard “VGA” 640×480 isn’t one of them.  I found it really odd that this “VGA” device wouldn’t output the resolution that’s most commonly associated with that term, but at least there’s an 800×600 option most CRT VGA monitors would be able to accept:

It also had some brightness and contrast controls, as well as a picture-in-picture mode that you can toggle between inputs.  I didn’t test PIP, but I imagine both of those features would come in handy if you used the device the way it’s intended to be used (and marketed as):  A cheap converter that lets you connect your aging security system, DVD player, or other analog TV device to a projector or CRT monitor.  I bet these were extremely useful in environments like a board room where people might need a way to quickly interface older equipment to whatever limited connections might be available.

So, overall, if you’re looking to connect your old PC to a monitor, this might be a decent choice if your intention is to mainly play older adventure games where strategy is far more important than reaction time and there isn’t much movement on the screen.  That’s especially true if you plan on using an LCD monitor with a native resolution that matches one of the many this converter supports.

This definitely wouldn’t be a good choice for game consoles though, unless you don’t play any games with fast movement, or games where timing your moves is important.

At less than $20, I totally understand why it might be enticing to some people.  I just wish “reviewers” would do a few seconds of googling and spread the right message about these adapters:  They’re absolutely not “gaming scalers”, but as long as you set your expectations properly, they have their place.

*There are many different brands and listings selling the same thing, but they should all have the same guts as the one I tested.  There’s another version that’s a different color and reverse direction (VGA to S-Video) and those also have about the same (or more) lag.  This is the specific one I bought though if you’re interested: 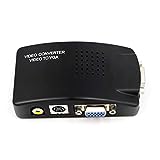 (as of January 30, 2023 – More infoProduct prices and availability are accurate as of the date/time indicated and are subject to change. Any price and availability information displayed on [relevant Amazon Site(s), as applicable] at the time of purchase will apply to the purchase of this product.)