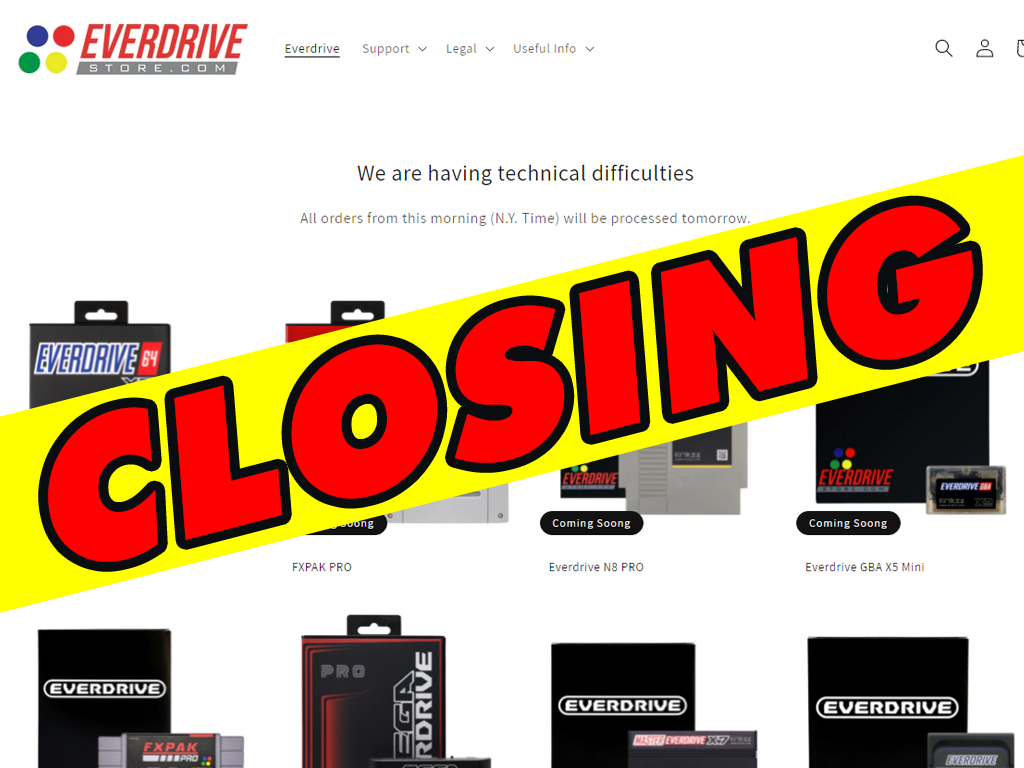 Everdrive Store, as the name implies, was an Everdrive distributor for Krikzz’s various Everdrive cartridges. Due to the ongoing conflict in Ukraine, Krikzz has evacuated the country, and has put Everdrive development and shipments on hold for the foreseeable future.

This put Everdrive Store in a position where, sadly, they could not maintain the store for any longer. As of two days ago of this posting, they shut down operation, and released the following statement on their website:

Everdrive Store then linked to their eBay store, where as of today, began listing them for auction with no reserve price.

Sadly, these auctions have slowly ballooned into the scalper market prices, and way above what they originally sold for new:

Luckily, there are still some EverDrives in stock at Stone Age Gamer (For the time being) for reasonable prices. If you’d like to get one now, we highly recommend picking them up, or you might be waiting for quite a while.

Here are a list EverDrive Devices currently in stock at MSRP (As of this posting):

Here are a few console bundles also still in stock:

Lastly, I know a lot of us can feel a sense of FOMO about missing out on these devices. Many of us either saving up for them, or just didn’t need it at the time and passing on them. While these eBay listings can be tempting, especially since you can get them immediately, you should probably just wait on them to become available again. It’s definitely easier said than done, especially after the last couple years of parts shortages and unavailability of many projects in this community. However, supporting scalpers and these outrageous prices would only set precedents that drive prices even higher, and overall hurt consumers as a whole.

Right now through, Krikzz and his family’s safety take first priority. Everyone here at RetroRGB sends him well wishes, and look forward to supporting Krikzz and his creations once he’s ready and able to do so.

Liked it? Take a second to support TraynoCo (Sega Saturn, SHIRO!) on Patreon!