John Linneman is back with another DF Retro episode about one of my favorite games of all time:  The original Mortal Kombat!  John takes a look at every version of the game, comparing each to the original arcade version…all while throwing in a bit of history and perspective to tie it all together.

I certainly don’t want to spoil anything from the video, but one thing I would like to discuss is the potential for a patched Sega CD version.  While I vaguely remember owning (or at least playing) the Sega CD version of the game as a kid, all I can remember about it was the load times and how it (on my old CRT probably connected via RF) didn’t offer anything over the Genesis version.  As I revisited this version later on in life while testing for RetroRGB, I was able to appreciate the differences, but the load times were even worse, as I was using 20-year-old hardware and a finicky Sega CD unit.

Now with the release of the Mega SD, MiSTer core and potential future Everdrive version supporting SCD, I need to ask:  Are there any Sega CD developers out there willing to patch the Sega CD version of the game?  The two main issues that need to be fixed are:

Hopefully someone in the scene might be able to create a patch that would allow us to better appreciate this version.  Either way, I’ll be giving it a try once more on my Triple Bypassed Genesis, to see how it holds up in its current form.

Anyway, check out the main video and enjoy a glimpse into everything you’d like to know about Mortal Kombat 1 versions! 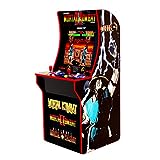 (211)
$662.98 $449.70
GAMES INCLUDED: Mortal Kombat, Mortal Kombat II, Ultimate Mortal Kombat Easy Assembly and Plugs into an AC outlet. 3 Games in 1 for 1-2 Players. Classic upright "Cabinet" design with 17” LCD screen and Real-Feel arcade controls Dimensions: 22.75”D x ... read more
(as of January 31, 2023 - More infoProduct prices and availability are accurate as of the date/time indicated and are subject to change. Any price and availability information displayed on [relevant Amazon Site(s), as applicable] at the time of purchase will apply to the purchase of this product.)

(9211)
$19.99 $17.95
The all new custom character variations give you unprecedented control to customize the fighters and make them your own The new graphics engine showcasing every skull shattering, eye popping moment, brings you so close to the fight you can feel it An... read more
(as of January 31, 2023 - More infoProduct prices and availability are accurate as of the date/time indicated and are subject to change. Any price and availability information displayed on [relevant Amazon Site(s), as applicable] at the time of purchase will apply to the purchase of this product.)
Liked it? Take a second to support Bob on Patreon!