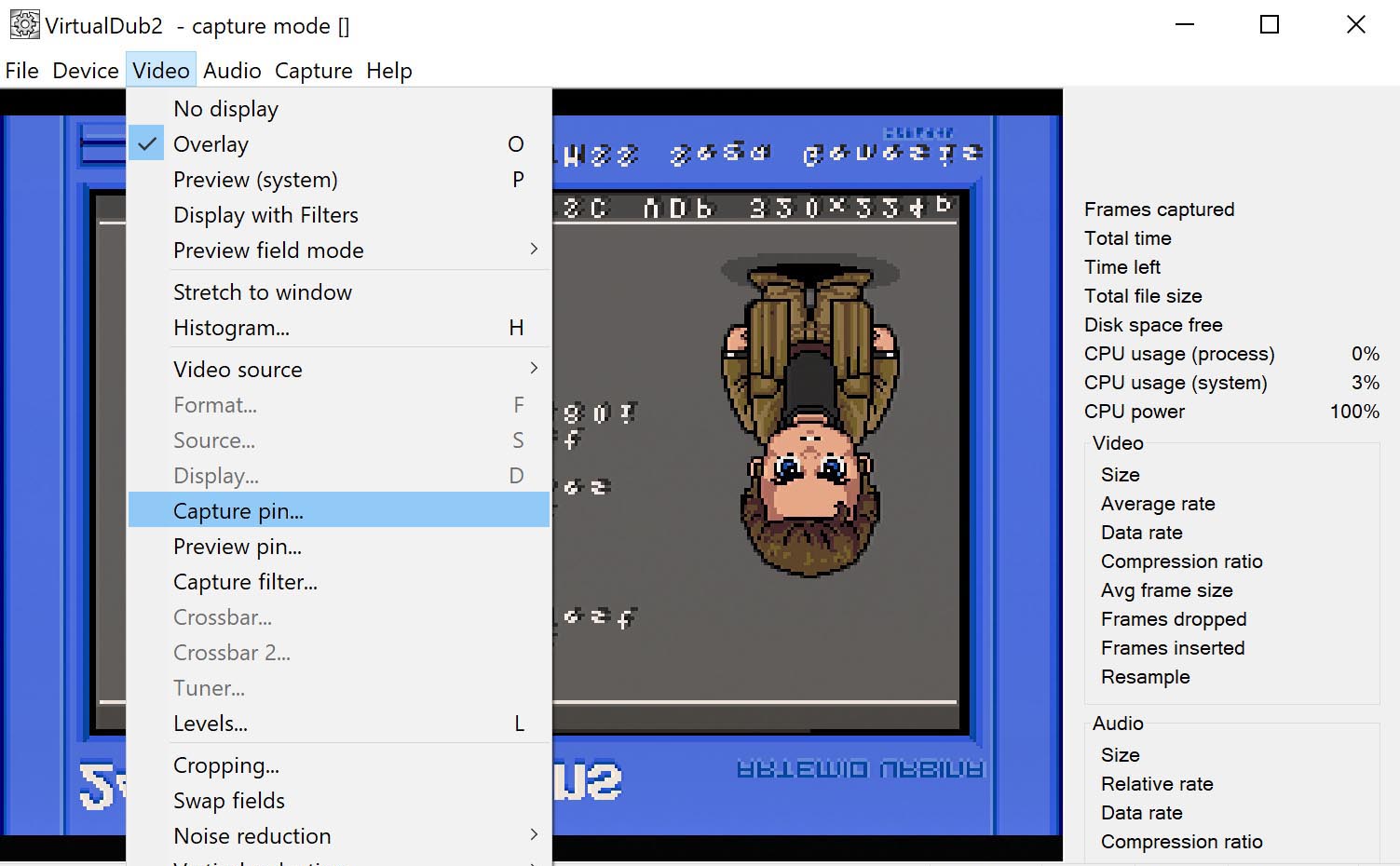 I just updated the Video Capture section of the website, to reflect a major change in my capture method:  I switched from using a customized OBS version, to using VirtualDub2.  This could be helpful both for people looking to capture uncompressed, or people who use normal compression and just want a reliable method!  Here’s links to everything and more info below:

When I started the journey of switching from screenshots to video captures, I had no idea what an uphill battle it would be.  Pretty much anything and everything that could go wrong seemed to, every chance it got!  Thanks to the help of the amazing people on the R3 Wiki (and other friends)…along with an insane amount of trial-and-error…I was able to get quality captures of both direct 240p and scaled games, using software called Amarec.

Then Amarec stopped working, with no rhyme or reason.  You could install a blank version of Windows on two identical machines and it would work on one, but flip your image upside down on the other.  Also, the audio input labels were always wrong!  It was maddening.  I then switched to a customized version of OBS portable that used the UTVideo codec for uncompressed captures.  It was mostly fine, but I’d often have to restart the software and the files UTVideo created were gigantic in size.

And then that stopped working too.  Even though it’s a portable version and I kept a zip file backup, it wasn’t working right anymore;  Maybe the UTVideo codec installed on my PC got messed up, since it’s installed separate from OBS?  Maybe a Windows update changed something?  Unfortunately, I didn’t realize this until after the RetroTINK 5x video aired and people noticed a glaring issue at 32:09 & 32:28:  The video captures looked like 4:2:0 color compression, while the still .bmp captures that came right after (32:19 and 32:41) correctly represent the 4:4:4 and 4:2:2 color space of the OSSC & RT5x (respectively).

Now, from a viewers point of view, no big deal:  The still shots were zoomed in much farther, were 100% correct and accurately represented the output.  You’d only really notice the difference from the videos if you were watching on a big TV, or screenshotted the YouTube video and zoomed in.  While the conspiracy-theory comments of “Mike paid Bob to hide that the RT5x is actually 4:2:0!!!” were really annoying and obviously false (proved by the still captures), more level-headed capture experts approached it properly:  “Hey Bob, you screwed up.”  And I did.  And I’m supposed to do better than that.

So, that lead me down the journey of learning a new method, creating a new guide and updating the entire video capture section to reflect the new findings.  I ended up using VDub2 for both capture and post-processing, which makes things easier, as I’m only managing one piece of software, not two.  On top of that, the codec I now use (FFV1) comes in the VDub2 folder, so there’s no codec to install, or worry about.  I also make it a point to not install any “codec packs” on my capture / editing PC, as I don’t want them to somehow affect my software.  Even if you use one of those packs, VDub2, appears to look for the codec in it’s own folder, so it shouldn’t affect you at all.  Theoretically, if I ever have issues again, I should be able to just delete the VDub folder and re-download it – Something that may not have worked with OBS, since a separate codec installation was required.

There’s some other benefits to switching to this method, other than accuracy that might appeal to people:

So, overall, if you’re someone who captures uncompressed and edits/compresses later, or someone that wants to capture to a compressed format like x264 directly, this new method seems overall better in every way.  Sure, it’s got its quirks…but as I explained before, all video capture software seem to as well :/

Check out the guide for all the details you need:  https://www.retrorgb.com/vdub2capture.html