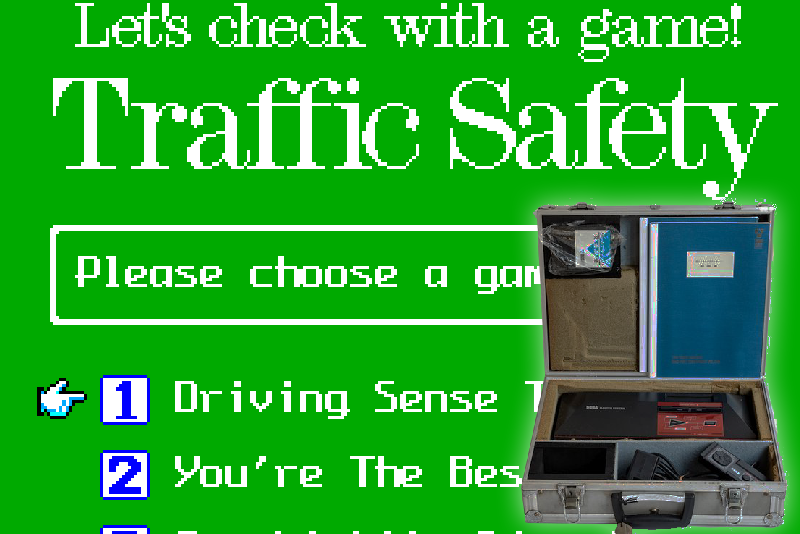 The SMS Power forums recently uncovered and released an extremely rare Japanese game about traffic safety for the Sega Master system.  If that wasn’t impressive enough, the community has also released a translation patch so that English speakers can also play this title!

According to the research done by a someone with the pseudonym SukaSega, the game was limited to the educational market with a run of 200 – 300 cartridges. Unfortunately, no one seems to know what happened to them.

A loose cartridge did surface on Yahoo Auctions on December 29, 2009 and purchased by a private collector who chose not to share its contents. Unfortunate, but well within their rights.

On October 2019, (nearly ten years later!) another cartridge listing appeared on Yahoo auctions, and this time the community at SMS Power were able to win the bid.  The NPO Game preservation Society assisted in dumping the ROM and scanning the manuals.

Once the ROM was available, an SMS Power user by the name of Maxim was able to reverse engineer and translate the text, graphics, as well as add new fonts into the game with the help of Damien Rogers from the NPO Game preservation society and others.

The game also briefly appeared on a Japanese TV show way back in 1988.

If you’re interested in learning more about this game, the full details can be found here and here.

You’ll also need to manually patch the ROM yourself.

On behalf of the RetroRGB crew, thank-you to everyone who contributed to this to make it possible.

If you enjoyed this story, the N64 also had a previously-unreleased game released this week. That post can be found here.