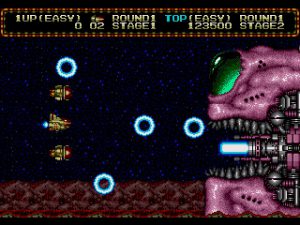 netpredakonn at Sega-16.com put out a call for help fixing the scoring bug in Zero Wing that prevents it being used in tournaments. Can anyone patch this?

“So, I’m part of a group which votes weekly for a shmup to be played by the members and many times a game cannot be played because it has what we call “broken score”. This means that there is some kind of quirk in the game which allows a player to keep scoring indefinitely and score an unreal amount of points with no end in sight.

Zero Wing has a situation described here in detail: [On the first loop] “Die in the last boss before the final pod leaves the screen and play the last checkpoint again. Each time this is done you get approximately 200.000 points, which also means 2 additional lives (first extend with 70.000, then one for each 100.000 points)”