Professor Abrasive just posted on Patreon regarding his upcoming Sega Saturn optical drive emulator, The Satiator.  He’s been in the final push towards getting this product released, and a big step on that path has been getting a production case completed.  He opted for injection molding and it appears the case is ready for a retail release.  He writes:

“These are the first samples off the tool – and they’ll be the last.  Thanks to the expertise of my US manufacturing partner and the toolmaker, they fit perfectly first time; the tool does not need revision.  I’m ordering production parts right now.“

This is great news for anybody who has been eagerly awaiting this product, which unlike other ODE’s available or upcoming for the Saturn, requires no modding whatsoever and leaves the stock optical drive intact (an especially cool feature for those with deep physical Sega Saturn Libraries). Professor Abrasive has previously stated that sorting out the production case “is the longest pole in the tent [of reaching release, as that] part is done in China and shipping is a bit sluggish with everything that’s going on.” 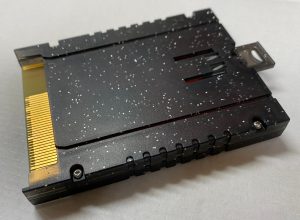 Also of note is a little sliding pull-tab that will allow one to remove the cart while still being able to close the door on the rear of the console.  It’s a slick little case, with the product’s title on the top and translucent plastic that will allow one to view the status LED.  He also went with “gold sparkles for the final version…because it just needs that little extra zing.”

Hopefully this means we are that much closer to a release date, a final price, and some of these little devices landing in hands of the hungry retro gaming community.