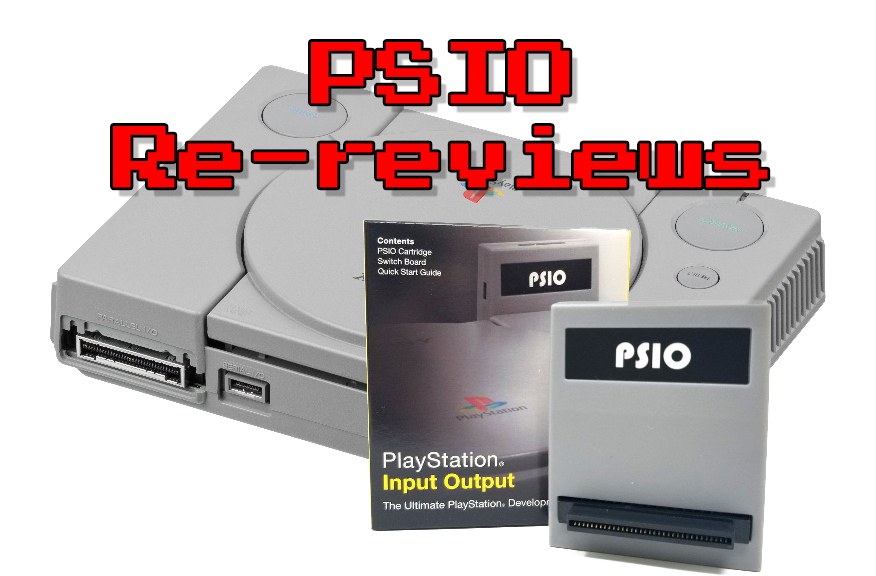 It’s been a few years since the release of the PlayStation SD device called the PSIO.  As with any new product, it had some bugs at first, but consistent firmware updates now allow it to perform very nicely.  Recent reviews from Voultar and My Life In Gaming showcased the device again and now that the “new” has worn off, some focus has been put on the other aspects of the device.  While I highly recommend checking out both their videos, here’s some things that stuck out with both reviews:

Image Compatibility:
It appears that some games will require patching before working with the PSIO.  While it’s understandable that some games might require special treatment, it seems quite a large portion of the console’s library will require specific patching for this device.  Maybe I was just lucky, but I had the opposite experience with other ODE’s like the GDEmu or SSDS3 – All I needed to do was copy the game to an SD.  While not a dealbreaker, it certainly ads to the list of things required for this device to work.

Installation:
The device requires an installation similar to a standard PS1 mod chip.  If you’re specifically purchasing this device to replace or preserve your PlayStaytion’s optical drive, then it’s not too big of a deal.  If you just need the ability to play backups, it begs the question:  Why not just install a mod chip?

Price:
And speaking of mod chips, you can get a good quality mod chip and 100 Tayo Yuden CDr’s  for 1/3 the price of the PSIO + comparable SD Card.  I can think of many situations where the PSIO would be worth it, but it’s worth mentioning that not everyone would benefit.

Support:
If you buy this device, plan on never selling it.  Or giving it as a gift.  Cybdyn Systems, the company that manufactures the PSIO requires registration for support and downloads, most likely as an attempt to prevent clones.  It should be noted that their security measures do work;  A known clone website has already attempted selling a hardware copy of the PSIO, but it was quickly pulled after advertising: “You must contact the original developer for firmware”.
Unfortunately, requiring registration is causing problems for Cybdyn’s customers.  I personally gave mine to someone else and attempted a transfer that is still pending.  I followed Cybdyn’s instructions and email them on February 13th, early in the morning.  I received a response (allowing for time zone difference) eight days later on the 24th and was told “You’ll need to give him your email address that you used to buy PSIO with and the Order ID for the cartridge you gave him.“.  The recipient of the PSIO forwarded that email to Cybdyn and was told the device is locked to the original email address:

Unfortunately, stories like this seem to be common.  One could argue that they’re a small company looking to protect their hard work and business.  Others might be concerned about getting support on a product they paid over $100 for…I mean, what if you just changed your email address?

I’ll leave it up to you to decide if that’s acceptable behavior.

(6617)
$99.99 $89.99
PlayStation Classic comes with 20 pre loaded games including, Final Fantasy Vll, Jumping Flash, Ridge Racer Type 4, Tekken 3 and Wild Arms This mini Console is approximately 45 percent smaller than the original PlayStation Includes two wired Controll... read more
(as of December 6, 2022 - More infoProduct prices and availability are accurate as of the date/time indicated and are subject to change. Any price and availability information displayed on [relevant Amazon Site(s), as applicable] at the time of purchase will apply to the purchase of this product.)

(802)
Ideal for professionals looking to maximize post-production workflow Read speeds of up to 95MB/s; write speeds of up to 90MB/s UHS speed Class 3 (U3) and video speed Class 30 (V30) for 4K UHD video Shock-proof, temperature-proof, waterproof, and x-ra... read more
(as of December 6, 2022 - More infoProduct prices and availability are accurate as of the date/time indicated and are subject to change. Any price and availability information displayed on [relevant Amazon Site(s), as applicable] at the time of purchase will apply to the purchase of this product.)
Liked it? Take a second to support Bob on Patreon!