I recently had the opportunity to take a closer look at this very odd GameCube Dev Kit.  This particular dev kit is called the NPDP Reader and its most defining feature is the large cartridge slot that has taken the place of the optical drive that you would find on a standard GameCube.

Now one of the questions you may be asking is “what goes into the cartridge slot?”  I can assure you that it isn’t a NES, SNES or N64 Game Pak, rather, it is a purpose built cartridge with the capacity of holding up to four GameCube games.  It is called a NPDP Cartridge.  Unfortunately, I did not have one to demonstrate its use with the NPDP Reader, but it is a very unique media format.  In fact, most of the actual hardware for the optical drive emulation needed by the NPDP Reader is housed inside the Cartridge and not the NPDP Reader itself.  The Reader is mostly comprised of passive comments.

We've preserved yet another Nintendo GameCube NPDP cartridge belonging to Heavy Iron Studios. It contains four prototype games which include: An early version of Ratatouille, two builds of Rise of the Underminer, and a debug build of the Incredibles! pic.twitter.com/uXDpMxgD4P

The photo in the tweet above showcases the NPDP Cartridge

Now as I alluded to earlier, the NPDP Reader is a game development tool designed primarily for testing and debugging new games.  Nintendo released a few other development devices such as the NR Reader and the TDev Kit.  All these can be seen together in a tweet below from the avid collector @GamingLegend64.

My gamecube Dev collection is nearing completion! It’s been a long and slow journey filed with a lot of fun and great friendships! How is everyone else doing with their collection?? Please share photos of where your at. 😃 #npdp #tdev #gamedev #gamecube pic.twitter.com/nUzI8PNDhJ

Now one of the goals I had with the NPDP Reader was to completely disassemble it and document the internals of the device to see how it differs from a standard GameCube.  All this is showcased in my video linked above, but in short, the NPDP Reader is very similar to a retail GamCube.  It even uses the same exact motherboard.  The primary differences are the removal of the optical drive and a few custom boards put in its place.  Additionally is has a region switch and of course the cosmetic differences to acomodate the NPDP Cartridge.  Here are a few samples of the custom boards inside the NPDP Reader: 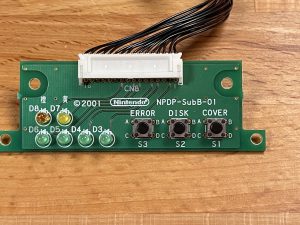 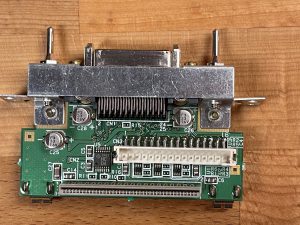 For additional high-resolution photos of all the unique boards and components inside the NPDP Reader, check out the post on the Macho Nacho website linked here.

Liked it? Take a second to support Tito on Patreon!