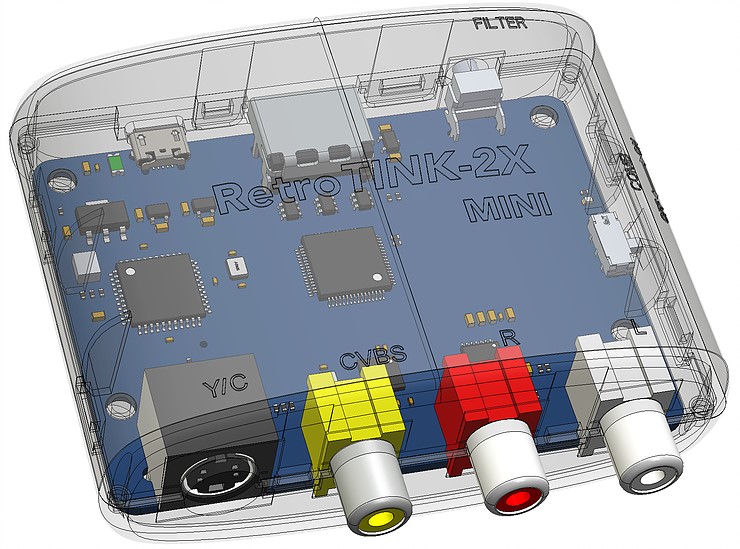 Mike Chi, the developer of the RetroTINK series of products has just availed his latest video scaling solution.  Called the RT2X Mini, this device is designed to be a simple, cost effective video solution for those users who just need composite or S-Video upscaled to 480p or 576p.  Mike noted that the new Mini replaces the old Classic model due to those components reaching “End of Life” production.

The MSRP for this device will be $69.99 and will come bundled with SNES/N64 compatible S-Video cables.  The RT2X Mini will not have a scanline generator nor will it have a component capabilities, however Mike mentioned that the Mini will be able to accept composite and S-Video at the same time from two different sources, and will choose based on which video signal the Mini receives first.  Audio can be split using a Y-splitter.

The RT2X Mini will also come with standard HDMI ports, so the RT2X Mini will not have mini HDMI sockets.  Finally one other interesting feature of this device is its ability to allow certain PAL N64 consoles to utilize NTSC region cables like S-Video for example.

The RT2X Mini is expected to be available for purchase in late Summer to early Fall 2020.  Mike believes the initial production run will cover demand and is stating there should be no need for preordering.  This could be a very effective solution for many who want or need to connect classic hardware that is limited to composite or S-Video as its best video output.  Todd Gill from Todd’s Nerd Cave added in the tweet about old 8 bit retro computers needing this product and he is absolutely right.  This opens the door to add a cheap and near zero lag video solution for many composite only based systems.

Introducing the RT2X-Mini: A budget CVBS/S-Video 2X based on the Pro platform — with a new universal S-video input circuit that lets S-video capable PAL N64s use common NTSC cables.https://t.co/o6pQ1Ff14h