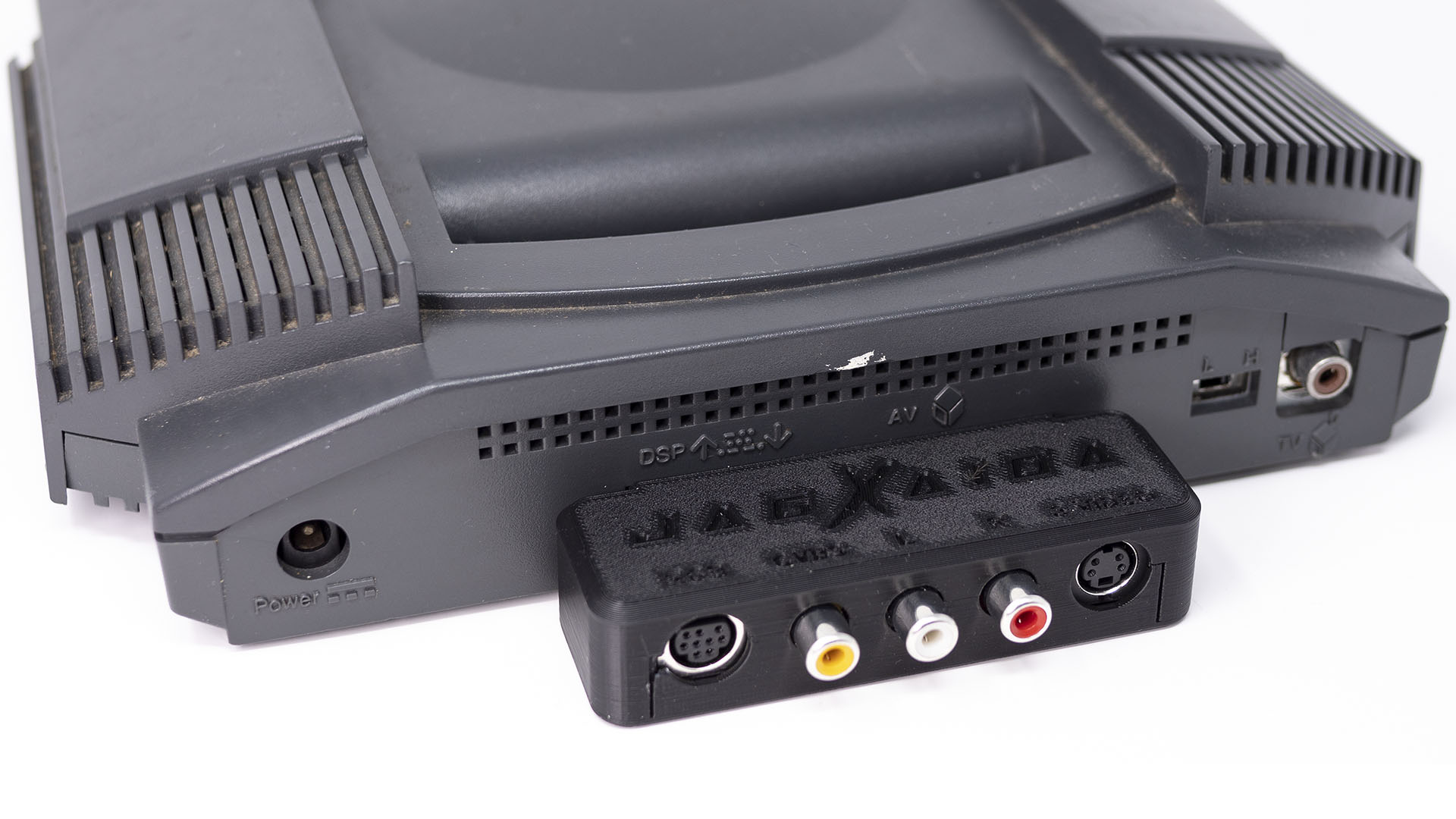 Humble Bazooka has just released a line of plug and play products for the Atari Jaguar.  I recently discussed the JagNet adapter and while there’s a few more of their products I’d like to take a look at, today I’m showcasing the ‘Jaguar All In One Analog’ output board:  It outputs Composite, S-Video, Stereo Audio and RGB via a Genesis 2 connector.  The quality is very high and it’s safe to use, but there are some shortcomings.  Please read on for more info…

The JAGAIOA plugs directly into the back of your Jaguar and should be compatible with every model;  I only had a US/NTSC console to try, but I believe these work worldwide.  Aesthetically, it looks great when connected – 3D printed materials don’t photograph well and while I tried my best to get the picture to look how it does in person, it definitely looks better IRL.

The composite, S-Video and audio outputs all work as they should.  I believe they’re all on their own discrete circuit, so it should be safe to use all outputs at the same time…something that’s really handy for people who want to game on a CRT, while streaming via a scaler.

Just a reminder:  It’s safe to split audio outputs via a Y Cable to send to two separate devices (TV and scaler?), but it’s NEVER safe to use a Y-Cable (or similar circuit) with video signals!  In the case of this adapter, that also means you can’t use the composite video RCA jack and composite video via the multi-out at the same time, as essentially there’s just a Y-circuit built into the board – Totally safe if only one is connected, not safe for both connected.
…and while yes, the audio will be quieter after being split and you might get some noise in the signal, it’s not harmful for the source or target devices.

RGB output is provided via a Genesis 2 MiniDIN port.  Here’s where the only shortcomings come to light:  First if you’re using HD Retrovision component video cables, the signal will look perfect, however you can’t use the composite video output and HD Retrovision (or any sync-on-composite RGB cable) at the same time.  Not too big a deal and the signal quality is excellent.

Next, all properly built Genesis 2 RGB SCART cables, as well as RAD2x HDMI cables and others like it will be very dim, due to how both the Jaguar and Genesis video out circuits work:

The reason for this, is the Jaguar contains all the components needed to process the image right on the motherboard, while the Genesis (and SMS) rely on components in the cable to shape the RGB video signal.  Sega presumably did this to save cost, since $0.20 in components for a feature most people wouldn’t use back in the 80’s ads up quick if you’re manufacturing millions of consoles!  Unfortunately for us, mixing the components on the Jag’s motherboard, as well as the components in a properly-made Genesis 2 RGB SCART cable result in an output that’s about 2/3’s the voltage (and brightness) of what it should be.  I need to pause for a moment and make one point clear:

THERE ARE NO SAFETY ISSUES HERE!!!

While yes, technically, the voltage is “wrong”, there is no chance of damage to your console, cable, scaler, TV, SCART device, etc.  In fact, the worst thing that can happen as a result of voltage too low is you don’t get a signal at all…but it’s more likely that everything will work fine, just dim.  And if you’re using an RGB monitor, compensating for this could be as easy as simply turning a knob on the front – Barely an inconvenience.  If you’re using a display that requires a remote to change brightness, it’s a bit more of a pain and that may be a dealbreaker for some people.  Either way, it’s safe to use.

So, why use the Genesis 2 connector at all, if there’s an issue?  While I don’t want to speak for Humble Bazooka, I’ve made the same choice for products I’ve been a part of and can probably guess:  Variety.  At the moment, it’s pretty easy to get cables and accessories for the Genesis 2;  RGB SCART, HD Retrovision, RAD2x and other cables are widely available and many places still have them in stock, even during a global part shortage.  Using a connector for the Sega Saturn would have mitigated the brightness issue, but finding a Saturn RGB SCART cable may have been more challenging and it’s also less likely that someone would have an extra lying around.  Plus those Saturn multi-out connectors are much harder to find, even before the part shortage!

One other potential fix would be for Humble Bazooka to add a video amplifier to the RGB lines.  This, with some resistors in-line, would boost the brightness to the same level that a Genesis 2 outputs and allow all cables to works exactly as they should.  I wanted to see how this would look, so I took a screenshot, boosted the brightness in Photoshop and took another screenshot next to a cheap Jaguar RGB cable I bought a few years ago and the HDR’s:

As you can see, not only does the JAGAIOA look good using both cables, there’s no checkerboard interference like I’m seeing on the cheap (and clearly unshielded ;/) RGB SCART cable I was previously using.  That means the board is routed really well and the signal is clean!

I spoke to Humble Bazooka and they’re looking into an alternative solution, to deal with the brightness issue.  At the moment, I’d say this is a great solution for people who want composite and S-Video output, or people using HD Retrovision cables (as long as you don’t need composite video and component at the same time).  If you’re using a standard RGB SCART cable, you might want to wait for an alternative revision.