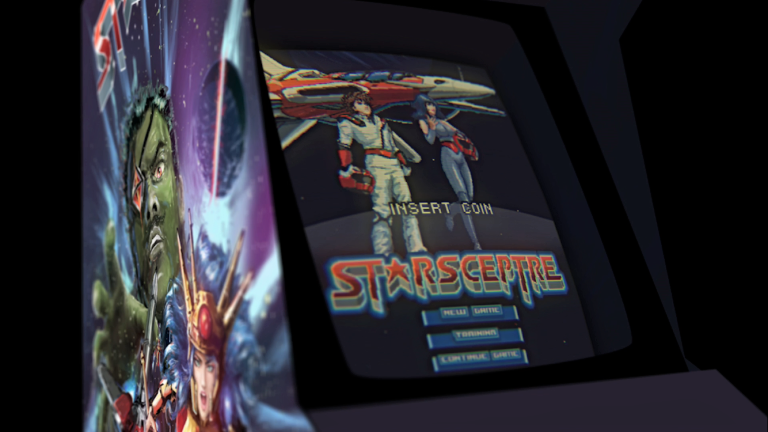 Starsceptre is a fantastic indie shmup that is in danger of getting delisted from the iOS app store due to low sales. Its developer, Richard Morgan hasn’t made enough to pay for the license fee to keep it on the app store. He has publicly asked for help, and as it’s an excellent retro style shmup that’s dirt cheap (currently .99 USD), with no in-app purchases (you actually get the whole game!) as well as no ads or gimmicks, I’d like to help save it. It’s also iOS exclusive.

So there’s 16 days left until #Starsceptre is no longer available – unless we can get enough downloads to cover the apple developer licence fee. Can you help? #gamedev #indiedev #shmup #shootemup #retrogaming #8bit #16bit – get it here:https://t.co/rdrOYGSZs4 pic.twitter.com/7BrR3pDJET

Richard actually developed the entire game on his iPad during commutes back and forth to work where he would let people try it out when they invariably asked him to do so.  I was first made aware of it via his instagram page where he enthusiastically teased some awesome videos of the game in action.

Work in progress*** Insane action with #Starsceptre Touch – I’m thinking I was wrong before and it should all be Touch, not joysticks, not tilt, hmmm… also time to crank up the #bullethell Now! #gamedev #indiedev #retrogaming #8bit #16bit #shmup #STG #anime #pixelart

Most recent iOS devices will be able to run the game AND it even allows for family sharing:

Age Rating Rated 9+ for the following:

I bought Starsceptre near release and I’ve really enjoyed it. It currently enjoys a 4.5 out of 5 review on the app store and works with both the iphone and the iPad.

The game features some cool options for retrogamers such as vertical and horizontal scanlines, 16-bit style aesthetic, tons of power up’s, fully acted, animated cutscenes with voices, and excellent music.  It could almost pass for a Neo-Geo game or late Turbo CD/Sega CD game.  Controls are handled via a tilt mechanic for one handed play or touch screen buttons. It even has different settings for sensitivity.

The game is also tough as nails like most games from that era.  When you die, the game treats you to a cool cutscene that “rewinds” time and allows you to continue from near where you left off. There is also a training option, and progress is saved. The bosses are huge and challenging, and there are tons of things to dodge as in any good shmup.

Frankly, it’s an awesome game, and it would be a shame to see it go. Let’s help promote indie developers who don’t rely on pay-to-win, in-app purchases, loot boxes, or other gimmicks to sell their wares. In addition, it’s just a frickin’ good game.

The opinions expressed in this article are my own. I received no compensation from the developer or RetroRGB and purchased the game with my own funds.  Whether you buy the game or not, I’d appreciate it if folks shared the article and made others aware about the status of this game. Thanks!