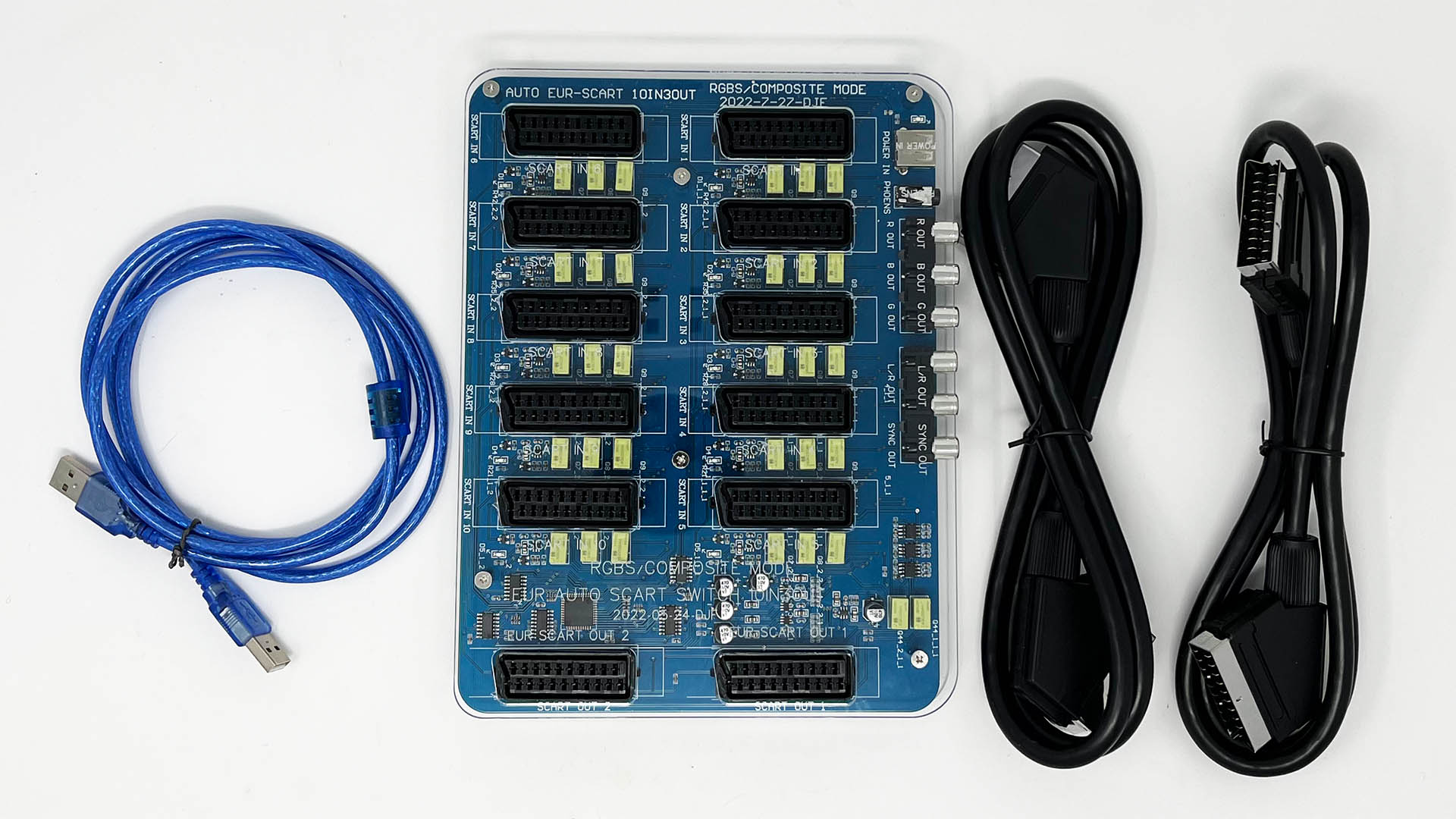 I recently reviewed a 10-input, 3-output switch from the Otaku Games Aliexpress store.  It appeared to work great, was safe to use the outputs simultaneously and even came with SCART cables that weren’t bad at all! There’s just one issue:  The L&R audio outputs are swapped in both SCART outputs ;/  The RCA & 3.5mm jacks are correct though and overall I liked it.  Definitely check the review below the link before purchasing, but this might be a good option for you… 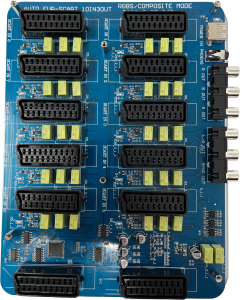 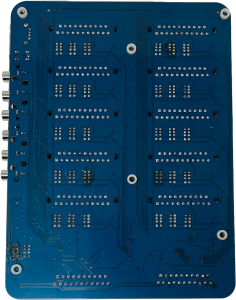 As with all devices that affect your entire setup, I strongly recommend reading through everything I found in my analysis.  Overall, I like it, but there may be a few specific things about it that won’t work with your existing cables or console.  Also, click on all pictures in this post for a full-sized view.

Are there multiple versions?

The first thing to mention is the switch I reviewed has three relays per port and the one pictured in the listing (that other people received) have four.  I’m assuming the 4th is related to sync and maybe the others still work fine, but there’s no way to know without testing.

Also (update Jan 18th), some people are saying their version of the switch can pass composite video, but mine absolutely did not (as shown in the livestream below):

Hey! Just to follow up on this; the scart switcher I received does switch to, and pass through, composite video. Both through the scart and the ‘sync out’. Let me know if there’s anything I can try or provide to figure out if something behaves different between our revisions pic.twitter.com/TI7V9Y7Jls

So, respectfully, everything discussed in this review should only apply to the models that look like the one I show.

This switch is only designed to pass RGB signals through.  That means anyone who uses Component Video (YPbPr), S-Video (Y/C) or Composite Video (cvbs) over SCART can’t use this switch.  I don’t have any issues with that, but I just want to make sure people who use something like a RetroTINK 5x that accepts both RGB and Composite over SCART is aware.

This switch accepts csync (75 ohm), composite video as sync and luma as sync – Basically, this will accept any properly built SCART cable, regardless of what it sync’s on.

The sync output of this switch is always csync on all outputs.  There’s no option to toggle the sync filtering on or off, but it seems to work well, so it shouldn’t be an issue.  This appears to be attenuated sync stripping and not “sync regeneration” – That means SMS and PCE will still have issues on certain model BVM’s, but that’s a very small percentage of users and not the fault of the switch.

The sync output voltage also appears to be perfectly safe.  Now, I don’t have the ability to test every single scenario possible, however I tried both a standard RGB SCART cable and one that was passed through a sync stripper.  In both scenarios, the switch changed the voltage, however it was always safe.  It even seemed to lower the voltage when slightly too high was detected.  Still, do NOT send this TTL-level voltage, as it’s still SCART equipment and that’s never a good thing.

As a result, this appears to be a device you can trust with your setup, however if you have any doubts at all, getting a cheap scope to double check is never a bad idea! 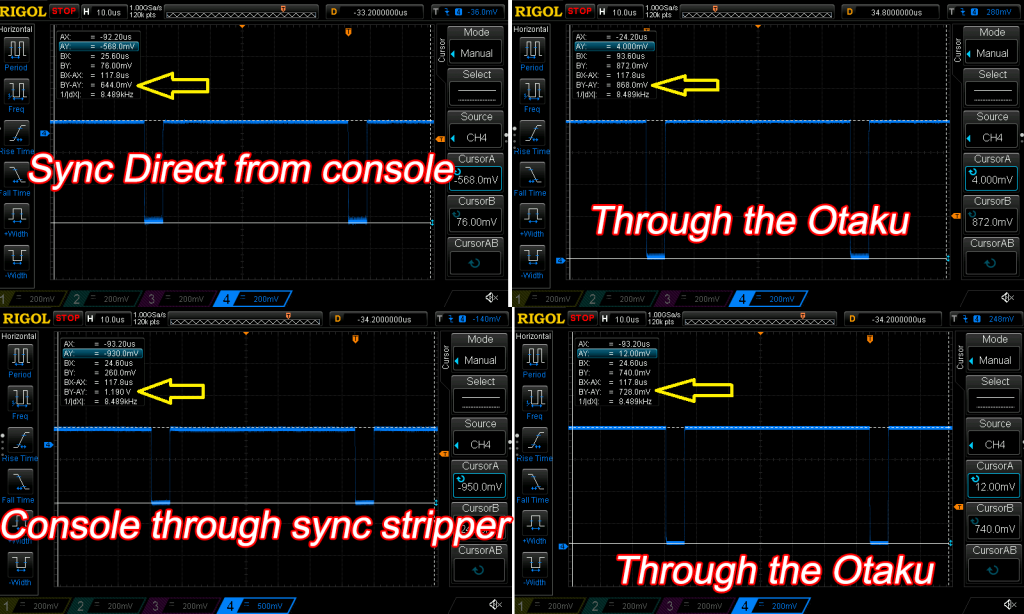 The switch has three outputs that can all be used simultaneously:  Two RGB SCART outputs and RGBs broken out to RCA connectors.  Audio is additionally outputted to both RCA and 3.5mm jacks on the side.  To be clear:  The RGBs signals coming out of all ports are identical – The RCA jacks are there to make it easier to connect this switch to RGB monitors, as well as other BNC equipment like Extron devices;  You just need cheap RCA to BNC connectors.

I performed my usual test of using sync-on-composite video cables and a Super Mario World level with a bright blue background to test the video quality.  In the picture below, direct into the OSSC is on the left and through the switch is on the right.  As you can see, there’s no checkerboard pattern, or any composite video interference added to the output.  Also, the quality itself is extremely similar, however there’s a slight bit of ringing on the outside of Mario, and it was a tiny bit harder to set phase.

So, what does that mean?  For gameplay, nothing.  I doubt anyone would notice any video quality difference.  Just don’t use the switch if you’re doing a deep video signal analysis…but if you’re doing that, you should always connect directly anyway. 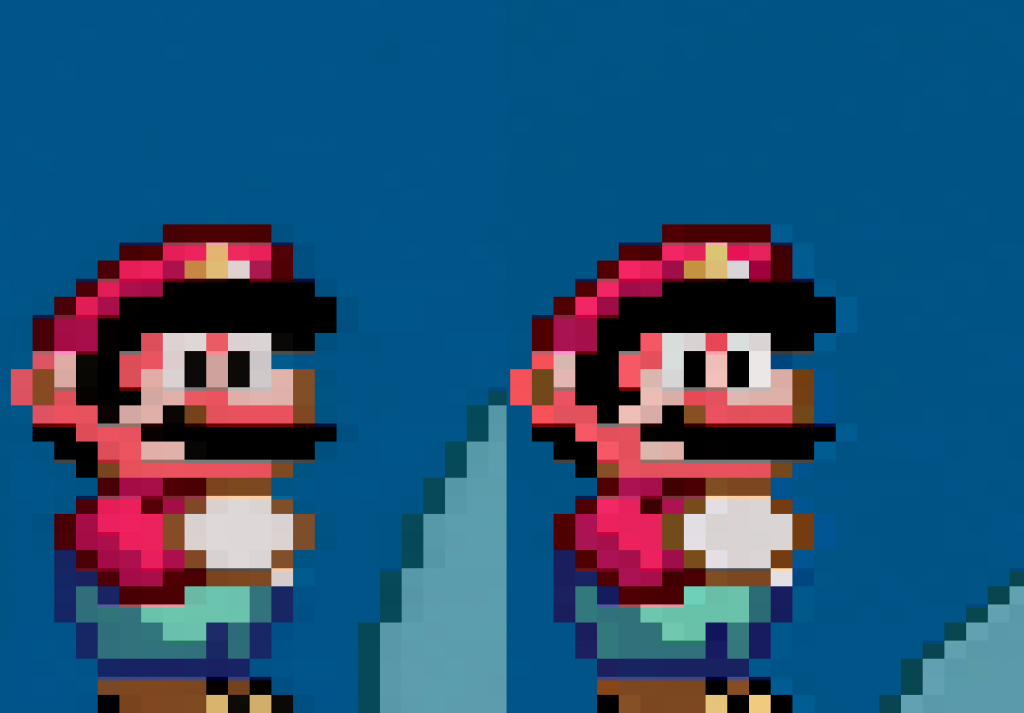 The brightness levels were also good, confirmed both by eye (see for yourself above) and down to the millivolt with an oscilloscope – I didn’t both to post both captures, since they were identical: 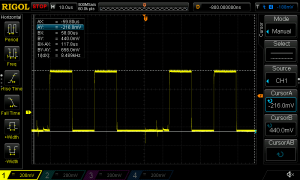 Both of the SCART outputs reverse the Left and Right channels.  I checked five or six times to make sure it wasn’t my setup, but unfortunately, it’s messed up.  That means if you’re going directly into a RetroTINK 5x, OSSC, or any SCART device, you’ll have to find some way to swap audio lines.  Maybe desolder the L&R wires in the SCART head and reverse them?

Both the RCA outputs and 3.5mm outputs are oriented correctly though, so if you’re going into a stereo, that’s fine.  Also, one I reversed the L&R output from the SCART head, I was able to run MD Fourier testing:

I connected a Genesis 3 with the 3BP mod to a SCART to BNC breakout, into my MOTU M4, MD Fourier-approved USB device.  I then recorded two samples and ran that test twice as a control.  I then recorded the same exact MDF sample from each of the outputs, using as similar of a method as possible.

As you can see in these pictures, the difference between the direct capture and audio run through the switch is about the same difference as direct vs direct;  Analog audio will never be a 1:1 perfect match and this switch seems to do very little to the signal.  Basically:  As long as you can swap the SCART audio (or use the other outputs), this switch will not negatively affect the audio quality:

This switch automatically outputs whichever input it detects.  This seemed to work well, but it’s worth noting that to be safe, you should never power on more than one console connected to an auto-switch.  Of course, I did while testing, just to see what would happen if you ended up doing it and the switch defaulted to whichever input was most recently powered on.

Now, there was some slight interference:  With multiple consoles powered on, there was a slow rolling, dim black bar that was going top to bottom across the screen.  This didn’t seem to affect voltage though, as the RGBs voltage all stayed exactly the same on the scope.  I’d post scope plots here, but really, it would just be the same picture repeated many times.

Based on the testing I did, it seems the auto-switching works fine and is safe, however you might get interference if multiple consoles are powered on at the same time.  Which is fair, cause you really shouldn’t do that anyway.

As a note, there are no manual-switching options on this switch, it is 100% auto.

SCART CRT TV’s require voltage on pins 8 (10v) & 16 (2v) – This sets the aspect ratio and tells the TV if the cable is in RGB or Composite mode.  The SCART outputs on the Otaku switch outputs 5v on both pins; I assume this is because the switch generates its own voltage on the output pins from USB power, rather than route the input power across the entire switch.  If that’s the case, I think this was the correct move, as this both compensates for improperly wired SCART cables and reduces voltage interference across the switch’s motherboard.

This might create potential for incompatibilities with some CRT TV’s SCART inputs, however the person who was nice enough to send the switch, also confirmed both features work fine on their SCART CRT.  So, I’d say it’s worth trying, but make sure to test as soon as you receive it.

As a note, this is not an issue with upscalers, RGB Monitors or pretty much any device other than CRT’s with SCART inputs.

Unfortunately, this switch uses a USB-A port for power.  As long as you use the bundled cable and a decent USB power adapter (not included), this isn’t an issue.  It’s just weird, because most people have tons of Micro USB, USB-C and even old-school USB A-B cables…but how many people have extra USB A-A cables?  Not a big deal, just a strange choice and I wish they used USB-C. 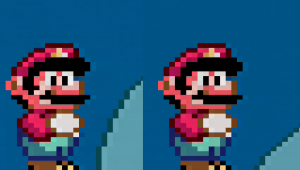 I also ran MD Fourier testing on the full setup with shielded coax SCART cable and their included one.  It performed really well!  Overall, it’s very cool you get two free, decent cables with the purchase!!

I really liked the switch…especially when you consider the sub-$100 price point.  I am biased when it comes to SCART switches, as myself and many friends who run arcade tournaments have been using superg’s gscartsw for almost ten years and (as long as they’re sent the proper signal), they’ve performed perfectly throughout much abuse, travel and constant connecting / disconnecting.

Only time will tell if these switches last as long and are compatible with as wide of a range of setups, but it’s looking very promising.  If you’re on a budget (or just need 10 inputs instead of 8), this might be a good place to start.  I just hope the build quality and revision I tested stay consistent…cause that’s other reason I always recommend the gscart:  The one you buy today is equal in quality to the one you bought last year and the year before.  That’s really hard to maintain and depending on your needs, that alone might be worth the extra cost.

…oh, and I hope they fix the L&R SCART output mistake ;p

If you’d like all the gritty details about the switch, I did a livestream testing it in real-time.  It’s very long and all the conclusions here sum it up, but if you’re someone who tests SCART switches, I’d call it a must-watch.