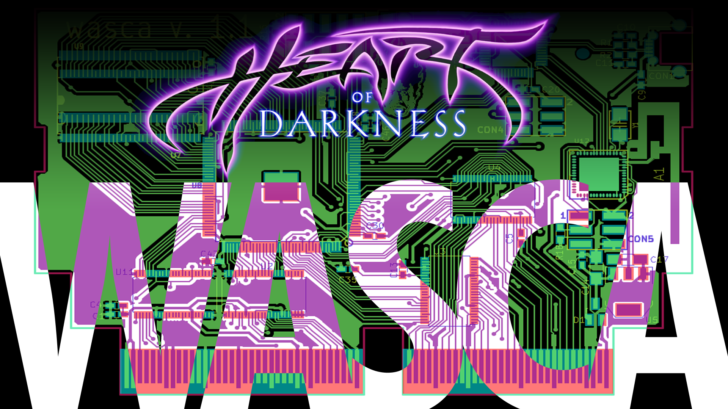 Heart of Darkness garnered a lot of buzz back in the latter half of the ’90s… It was both well promoted and highly anticipated as the follow up project to Éric Chahi & Delphine Software‘s earlier Out of This World strategy/platforming adventures. Many Saturn owners looked forward to experiencing this cinematic title on their home console back in 1996[1].

However, after 6 years and numerous iterations in development, it was pushed back until it finally saw release in 1998 on PlayStation and Windows PC. Unfortunately, by this time the Saturn was already dead in the water, and while a Saturn port had been in development until at least 1997-03[5][6], it never had a chance to make its way onto store shelves.

Fast forward to 10-05-2017, and A Murder of Crows had managed to obtain a copy of the early beta prototype disc that was originally shown at the 1996 Tokyo Toy Show (v.0.9.39) and uploaded a video demonstration as proof of the game running in the Yabause emulator.

Unfortunately, due to a lack of proper optimization, the game required a non-existent (to consumers) 48Mbit (6MB) expansion memory cart using an unusual memory mapping in order to boot and run on stock Saturn hardware. Regardless, it was exciting to see the Saturn port running, and community members were nonetheless impressed.

Then on December 24, 2018, A Murder of Crows RELEASED his own dump of the prototype (along with several other dumped disc images) to the community in honor and memory of his late friend, Don Russell, who had passed away after a tough battle with cancer.

While some attempts were made to get it running on real hardware using resources available (such as the Action Replay cart), it would remain necessary (for the time) to use an emulator spoofing the sufficient virtual memory expansion in order to get the prototype running at all…

However, one cart solution that had already been in development since 2015 would, nearly 8 years later, ultimately manage to boot and run this prototype on REAL HARDWARE…

Enter the WASCA Cartridge… a development project by cafelalpha2 and hitomi2500 that got its start back in 2015. WASCA (still in development) is a Sega Saturn multipurpose cartridge designed to mimic Power Memory, Backup, 1MB ROMs from KoF 95 and Ultraman, and 1M/4M RAM expansion. It’s also designed to launch any 3rd party code (such as bootloaders like PseudoSaturn, for example). Future firmware upgrades may even include NetLink and ODE functionality… The cart is based on the Altera MAX 10 FPGA with external SDRAM and internal Nios II soft CPU.

However, perhaps most important (at least where THIS article is concerned) is the fact that (thanks to hitomi2500) WASCA now officially supports the Heart of Darkness Prototype, capable of loading all necessary data required into expansion RAM in order to run this beta build!

“WASCA has 512Mbit (64MB) SDRAM memory mapped onto CS0 and CS1 slot bus ranges. Saturn’s CS0 range is 32MB and is used for bootable carts code and data, however, only up to 1 or 2MB were ever used in Saturn games, while the ST-V arcade board used the entire range. The CS1 range is 16MB, and was used exclusively for backup carts. That is where the Heart of Darkness proto stores its data. Since WASCA emulates backup with RAM (automatically syncing to SD card), there was no need to map additional RAM as it was already there… For a homebrew developer, the current WASCA prototype can provide as much as 48MB of RAM, and it’s possible to distribute the game as a file on SD card. Also, launching ST-V Arcade ROMs should be possible, but I’m not sure about [individual game] compatibility…”

In response to an inquiry regarding the potential availability of WASCA as a product for sale, hitomi2500 expressed hope in bringing it to small market but also made it clear that they could not currently acquire the chips necessary to produce it. However, the design is open source and it is possible that either cafe-alpha may assemble some for sale or that it may likely end up on Aliexpress, as these things often do…