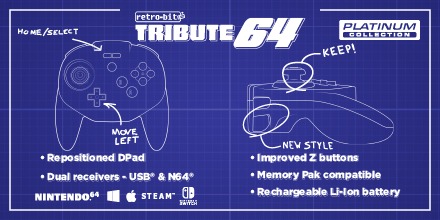 Tis’ the season of wireless N64 controllers with Retro-bit throwing their hat into the ring with retro-competitor Hyperkin.  Unlike the latter which is based on Bluetooth technology, the recently announced Retro-bit “Tribute64” will be based on a 2.4GHZ technology.

At first glance, the design appears to be a reworked version of the Hori N64 controller, which is what the original wired Tribute64 controller was based on. The most obvious improvement at first glance is that the directional pad is now repositioned further left than the original design where it was in the middle of the controller.  Other improvements involve the Z-button getting a modern redesign as modern triggers, and the addition of a select button.

In a move that mirrors Retro-Bit’s recently released 2.4 GHZ Sega Saturn controllers, the wireless Tribute64 controller will also include dual wireless receivers; one USB for Windows/OSX/Steam/Switch (and presumably Linux), and a dongle for the original Nintendo 64.

Memory packs will need to be plugged into the receivers instead of directly into the controller. This is similar to the upcoming Hyperkin Admiral controller with the exception being that Hyperkin’s dongle is advertised to include a MicroSD slot that allows users to transfer their saves back-and-forth from PC’s.  When questioned about this on twitter, Retro-bit’s response was that the controllers features are still being finalized.

There is a built in rechargeable Li-Ion battery, but no word on what the mAh capacity is or if it is removable. Another notable omission is whether the controller will use the modern USB C standard or if it will opt for the older MicroUSB standard.

For those who are interested, the wireless Tribute64 will be available sometime in 2020, unfortunately, there is no release date nor price announced as of the time of this post. That said, Hyperkin’s Bluetooth based Admiral is scheduled for release on December 23rd, 2019.