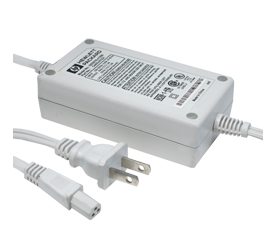 The Neo Geo CD family of consoles originally came bundled with an oddly shaped plug (T-shaped 3-pin plug) at the end of the power supply. This particular PSU can be problematic to say the least and its only (decent) replacement comes in the form of an OEM unit (which can be crazy expensive nowadays).

Julian found the same plug on an adapter that is used to power an old external HP Cd-drive (Drive is HP 8220e / 8230e). The HP adapter needs a little modification to properly match the Neo Geo CD’s specifications, namely reduce the 12v signal to 10v and switch 2 pins around as mentioned in the video.

So buying an old HP 8220e drive or just the HP SDD018-n1000 adapter can get you started on building your own custom NGCD power supply instead of spending 50$+ on a OEM one.

Note that the same plug is also found on the elusive Sharp Famicom Titler.

The video’s link: https://www.facebook.com/JEmmettTurner/videos/2095444900493812/
(Please note that this was posted on a closed group so you might want to join in able to view the above content).