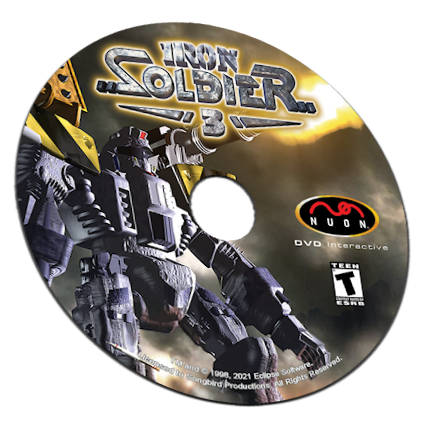 Songbird Productions, known for their Atari Jaguar and Lynx releases, are currently gauging interest in a reprint of Iron Soldier 3 for the NUON. The fully licensed game will be identical to the original release. It is expected to cost $59.95 and will include a 28-page manual.

For those who are unfamiliar with the NUON platform, it was a processor designed by VM Labs that was integrated into certain DVD players in 2000-01 to give them enhanced multimedia functionality and 3D gaming capabilities. Unfortunately only four movie releases used the enhanced features and only 8 games were published for the system. Certain NUON-equipped players had the ability to load games from CD-R, so there are more homebrew releases than there are official ones. There’s even a port of a few games originally developed on the PlayStation 1’s Net Yaroze Dev Kit!

Originally intended to be a first-party PS1 exclusive, Iron Soldier 3 was independently developed by Eclipse and released on the NUON in 2001. It features the same first person mecha simulation style of gameplay as the original two games in the series. For those who have played the PS1 version, there is a decent comparison between the two versions located on the NUON-Dome website.

Songbird Productions is looking to get at least 100 people to join the wait/interest list by January 31st, 2021 so the re-release can happen. If you’re a NUON owner like myself, you can find a link to the sign-up here.

*Special thanks to Kevin Manne, the owner of NUON-Dome, for giving a heads up on this re-release and for all the information from his website.