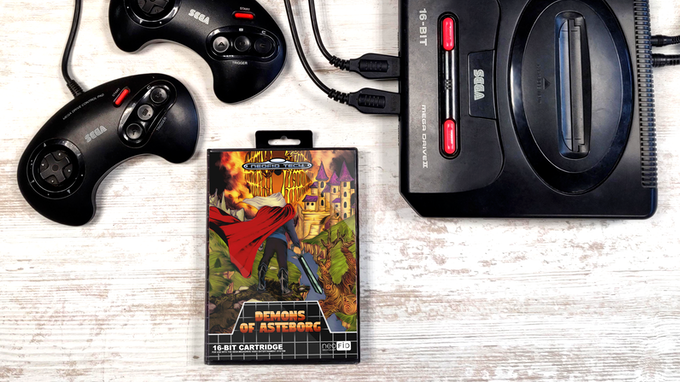 A new action-platformer is coming soon to the Sega Genesis/Mega Drive. Created by Neofid Technology, Demons of Asteborg is a platform-based game with some metroidvania elements inspired by a lot of other MegaDrive/Genesis titles such as Ghouls n’ Ghosts, Castlevania, Mickey Mania, Space Harrier, and Panzer Dragoon according to the development team via their website.

Originally launched as a Kickstarter campaign back in late 2019, Demons of Asteborg is currently in active development. Although it is in development primarily for the Genesis/Mega Drive, it is also being developed simultaneously for Steam & the Nintendo Switch.

Over its development cycle, Neofid Technology has released multiple demos of Demons of Asteborg and I’m happy to share with everyone that the game plays like a quality title from my experience. With such a promising start, there is potential for it to be an enjoyable game for fans of the Genesis/Mega Drive or action-platforming games once the game is finalized.

The game revolves around a Knight named Gareth who plans to free the Kingdom of Asteborg from demonic enslavement. There will be 9 levels as well as a bonus level inspired by Panzer Dragoon & Space Harrier.

Luis Martins, the artist of the Paprium & Tanglewood Genesis covers will also be illustrating one of the two covers for this title. The cover art will be reversible, which is a nice touch.

One factor of note is that the game should exceed 4MB (32Mb) in size which probably contributes to the higher cost of the physical copy. There may also be a 2-player mode, but according to Neofid’s kickstarter page, “it’s surely not what you might expect”.

As with many crowdfunded goods, the developer missed their initial release date for August of 2020. Demons of Asteborg is now predicted to be released for the Genesis/Mega Drive in June 2021.

The game will be released this June 🙂

Anyone who missed out on the Kickstarter campaign can still pre-order the game directly through the demonsofasteborg.com website. Digital and physical copies (Genesis/Mega Drive cart, manual, case) are available for pre-order ranging from 15,00€ (~$18) to 69,00€ (~$82 USD).

Tthe included platforms for the digital version of the game include STEAM and the Nintendo Switch eShop. Genesis/Mega Drive gamers have the option of downloading a ROM file for their favorite flash cart or emulator (should they support the game). Certain tiers also include an OST digital download.

As a reminder, there is always an inherent risk when pre-ordering any product. It’s always a good idea to know what your reimbursement options are should anything go wrong.