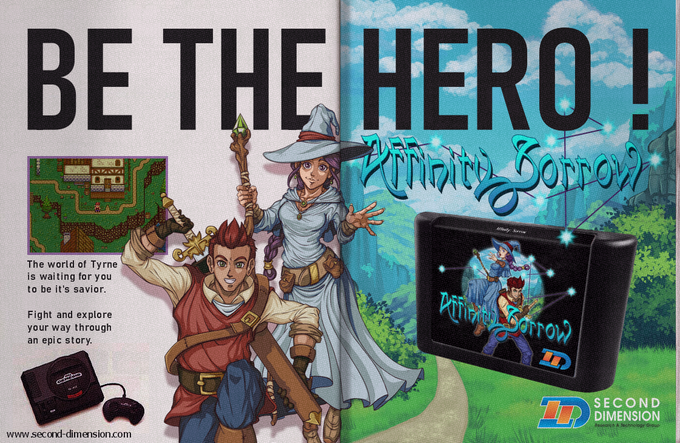 Second-Dimension has launched a kickstarter for a new Sega Genesis / Mega Drive game, Affinity Sorrow. The game will be a top-down RPG, havily inspired by past classics like early Final Fantasy games, Lufia, Breath of Fire, Dragon Quest and the Mana series. The game will be available as a ROM file and on an in-house made cartridge.

They have previously worked on Sega Genesis / MD games like Kromasphere: YAGAC MD, The Curse of Illmoore Bay and Eyra the Crow Maiden: A new adventure [which was also released for NES and SNES] and an NES game Family Picross.

Affinity Sorrow has already reached it’s goal, as well the first stretch goal for vinyl record. Main soundtrack for the game, will be composed by Lawrence McCormick, also known as Inglebard, who composed soundtracks for Homeland on PC as well as the upcoming Sega Genesis demake of Castlevania: Symphony of the Night, the upcoming Genesis port of Street Fighter Alpha, some songs for the Genesis demo of Splatterhouse and more. Main theme music will be composed by guest composer, Hiroki Kikuta, legendary composer and sound designer of Secret of Mana, Trials of Mana and Romancing SaGa amongst .