A brand new Amiga ‘Shoot’em-Up'(Shmup) game called Reshoot·R has been released for the AGA (Advanced Graphics Architecture) series of Amiga computers.  This means owners of Amiga 1200, 4000, and the CD32 are able to play this game with no addon cards, and is developed to run on standard hardware setups.  Two Megs of Fast-RAM is recommended as well as a joystick or CD32 controller.  The game is also capable of running on Amiga Emulators as stated from the authors site.  The developers noted that the game has been tested on the following 68K CPU’s: 68020, 68030, 68040 and 68060.

Reshoot·R is a follow up to the game Reshoot, another Shmup released several years back by Spiele Schreiber.  This new game however is a complete mind blowing experience on the Amiga really showing off some impressive tech utilization, and pushing the Amiga without slowing it down.  As well as that Shmup essential killer soundtrack.  This game’s OST brings me back to my Trance days of the mid 90’s and early 2000’s (Pure PvD for those Trance lovers who know what I am saying ;D).

Available in many different purchase options, Reshoot·R probably has the method or medium that potential owners might like.  The Reshoot·R Download version is the digital download only option while the Reshoot·R Pure is a physical copy via CD Rom format and comes with the game manual.  The Reshoot·R Signature Edition includes the physical CD Rom of the game, a CD soundtrack of the game, manual, and “Making Of” material.  Plans to release a “Classic Edition” on a 3.5″ Floppy Disk are in the works as well as a standalone “Emulated/Adaptation” version for Windows/Linux/Mac that would be in a digital download format.  A separate option to purchase the Reshoot·R Soundtrack digitally is also available.

Check this game out if you are a fan of Shmups and/or the Amiga. 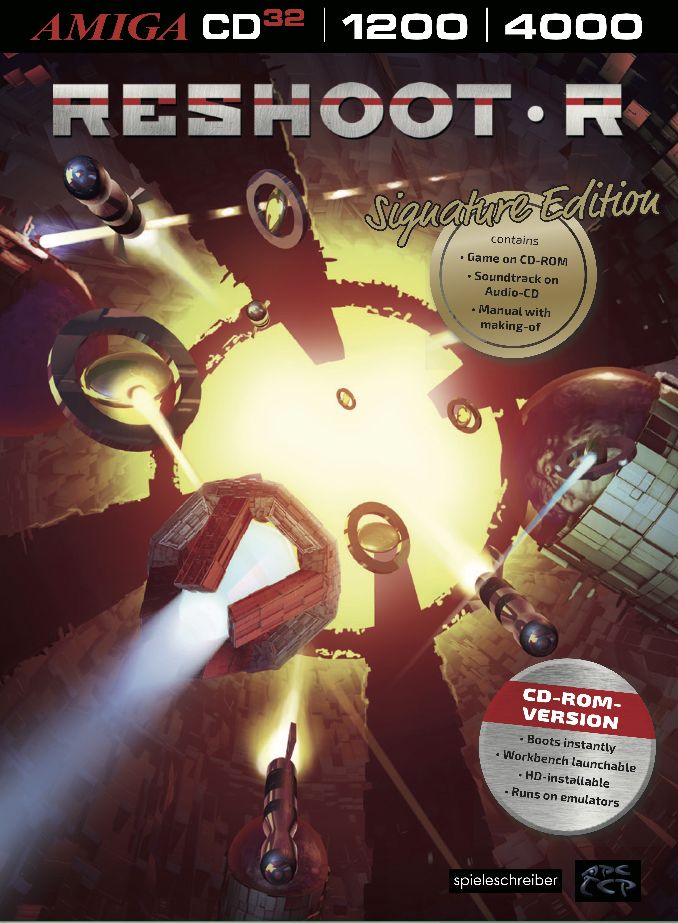